COLLIERVILLE, Tenn. (AP) — Law enforcement officials on Monday said the gunman who killed one person and wounded 14 others at a Tennessee supermarket before killing himself had been asked to leave his job at the grocery store earlier that day.

In a news release, Collierville police say UK Thang had moved to the upscale suburb 30 miles (50 kilometers) outside of Memphis in the summer of 2020. He worked daily in a sushi business at the Kroger in Collierville. 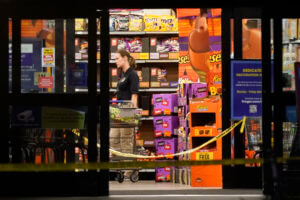 A responder walks down an aisle in a Kroger grocery store as the investigation goes into the night following a shooting earlier in the day on Thursday, Sept. 23, 2021, in Collierville, Tenn. Police say a gunman attacked people in the store and killed at least one person and wounded 12 others before the suspect was found dead. (AP Photo/Mark Humphrey)

“He was a third-party vendor working inside Kroger and was asked to leave his job the morning of Thursday, September 23, 2021,” the release said. “The police department is processing evidence to include electronic evidence, as well as the crime scene vehicles, and interviewing other potential witnesses.”

Thang died of an apparent self-inflicted gunshot wound within a couple of minutes of officers arriving at the scene. The victims included 10 employees and five customers, police said.

A spokesperson for Kroger did not immediately respond to an email query about why Thang was asked to leave his job.

The Collierville store has remained closed since Thursday’s shooting but will continue to provide pay and other support to employees, the statement said.

Police say Thang acted alone and did not appear to target anyone specifically. The entire shooting was over within minutes as first responders swarmed the scene.

As of Monday, four of the victims — all in stable condition — were still recovering at a Memphis hospital.