NORTH PORT, Fla. (WFTX) — An arrest has been made in a late September killing where investigators say a man stabbed a woman approximately 38 times in her Florida home.

Michael Douglas, 53, is in custody and facing a charge of first-degree premeditated murder in the woman’s death. 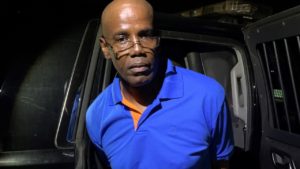 North Port police say investigators found the woman’s body, at a property on South Haberland Boulevard, with hands tied behind her body and her mouth taped. Police say the victim had just returned home from work.

The Florida Department of Law Enforcement’s investigation into Douglas’s DNA found a match with the victim’s swab samples and a partial match in her fingernail clippings.

Police say, after talking with the victim’s daughter, Douglas was pursuing the woman for a romantic relationship and was also trying to encourage her to end a relationship with her current partner. The daughter told police Douglas had visited their home more than once but had never been inside the property, except for the garage.

“A crime of passion,” said Josh Taylor, public information officer for North Port Police. “Typically, that’s why it was very important to understand who was in our victim’s life. Not a random act and just needed to know who our victim knew. With help of family, we were able to identify individuals and then, clearly, with all of the evidence we talked about, put it together and locking the suspect into his story and determining none of that was true. It leads you down the right path.”

However, investigators say Douglas and the victim had documents that showed the two were in the process of buying a house together. North Port Police also wrote, at the suspect’s workplace, one co-worker said Douglas was displaying a picture of the victim to others, encouraging people to look at what Douglas called his “beautiful wife.”

On September 26, at about 7:30 p.m., an off-duty North Port police officer recorded dash cam video of a 2015 Jeep Grand Cherokee parked near the victim’s home. The Cherokee had the same features as a vehicle registered to Douglas. Investigators say Douglas also parked the SUV in a manner where it would appear disguised from the road but where a driver would have a clear view of the woman’s house.

The killing was two days before Hurricane Ian hit the region, leading to more challenges on the investigation. Taylor noted the steps in the initial police work that led to the charges, ten weeks after the crime.

This story was originally published Dec. 9 by WFTX in Fort Myers, an E.W. Scripps Company.