PHILADELPHIA (AP) — A group of more than 100 former and current prosecutors and law enforcement officials is calling on President Joe Biden to prioritize criminal justice reform and make good on his campaign promise to form a task force to evaluate how criminal cases are prosecuted in the U.S.

The group, which included state attorneys general, police chiefs and former federal justice officials, sent a letter to the Biden administration Tuesday asking that a task force on 21st century prosecution be convened by the end of the year. It’s the latest call to action from progressive groups that have been putting pressure on the Biden administration and the Justice Department to implement criminal justice overhauls from policing to prisons. 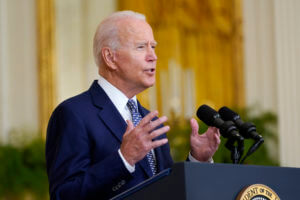 FILE – In this Aug. 10, 2021, file photo President Joe Biden speaks about the bipartisan infrastructure bill from the East Room of the White House in Washington. A group of more than 100 former and current prosecutors and law enforcement officials is demanding President Joe Biden prioritize criminal justice reform and make good on his campaign promise to form a task force to evaluate how criminal cases are prosecuted in the U.S. (AP Photo/Susan Walsh, File)

“We haven’t seen a national focus on the work of local prosecutors, who were in many ways the driver of damage that has been done over the decades, but in many ways in recent years in isolated jurisdictions are the source of reform and inspiration,” Miriam Aroni Krinsky, founder and executive director of the group Fair and Just Prosecution and also a former federal prosecutor, said in an interview.

Biden’s criminal justice platform included plans to create a task force to look at prosecutorial discretion, meaning the decisions made on when to charge someone and with what crimes, which varies widely across jurisdictions and can mean longer sentences, parole or probation and force some people to take plea deals.

The letter writers are hoping the administration will take a broader look at prosecutorial policies with its recommended task force. Krinsky’s organization released a research paper Tuesday outlining hopes for what the task force would look like and what it could achieve as well as further steps the federal government should take to incentivize implementing recommendations from the task force to make sure its findings don’t sit on a shelf gathering dust.

The Biden administration has held multiple meetings to discuss and implement measures to address rising gun violence across the country as well as touting money in the COVID-19 relief package for policing.

Other talks have focused on prison reforms or the death penalty. Attorney General Merrick Garland recently traveled to Chicago and visited a community group focused on driving down violence in the community.

But the group of prosecutors and law enforcement officials in Tuesday’s letter noted much of the discussion around criminal justice reforms neglects to address the importance of prosecutors in the system and policy changes such as ending cash bail and declining to prosecute smaller crimes as ways to address racial inequity, persistent poverty and over incarceration.

“For a president who has very much expressed support for reforming the criminal justice system and a rethinking of the type of tough on crime policies of the ’80s and ’90s, this is an opportunity to ride the wave of local innovation and pierce the black box of the local prosecutors office, to take the best of what is happening locally and implement it around the country,” Krinsky said.

Under the Fair and Just Prosecution model, the task force would operate outside of the Justice Department and consist of reform-minded prosecutors, civil rights advocates, defense attorneys, crime victims, researchers and those who have been affected by the criminal justice system. The group said the task force should produce a final report in about a year.

The group wants the task force to come up with an implementation plan for its recommendations including an oversight group, and ways to incentivize local prosecutors to enact the recommended reforms through grants and federal policy changes.