NEW YORK (AP) — The woman Harvey Weinstein is on trial for allegedly raping spoke highly of him and once called him her “spiritual soulmate,” her former roommate told jurors Monday.

Weinstein’s lawyers called Talita Maia to the witness stand as they looked to raise doubts about her ex-roommate’s allegations that he raped her in March 2013 at a New York City hotel. 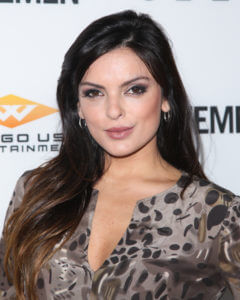 Maia, a Brazilian actress who lived with the woman in the Los Angeles area, was with her on the New York trip and said nothing seemed amiss when they met Weinstein for breakfast after the alleged rape.

The accuser testified last week that she didn’t tell anybody what happened but was “pretty shut down” at breakfast.

“Did she seem like herself to you?” Weinstein lawyer Donna Rotunno asked.

Maia said she was testifying in response to a defense subpoena, telling jurors: “I don’t want to be here at all.” On cross-examination, she testified the two women had a falling out in 2016, but added, “I don’t hate her or anything like that.”

The Associated Press has a policy of not publishing the names of sexual assault accusers without their consent. It is withholding the name of the rape accuser because it isn’t clear if she wishes to be identified publicly.

In addition to the alleged rape, Weinstein is also charged with forcibly performing oral sex on a different woman in 2006. The 67-year-old Weinstein has maintained any sexual encounters were consensual.

Maia said she and the woman met Weinstein at a Hollywood party a few months before the alleged rape and that she believed the woman and Weinstein were in a relationship at some point and had stayed friends afterward. 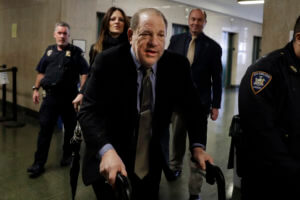 Maia said she initially didn’t know who Weinstein was, but once she found out he was a Hollywood bigshot, she teased him by saying “that’s why everybody is being so nice to you.”

Maia said the woman she was summoned to testify about put her arm around Weinstein and said: “No. It’s because he’s so cute.”

The defense is calling witnesses following more than two weeks of prosecution testimony, including accounts of six women who say the once-powerful Hollywood boss subjected them to vile sexual behavior.

Weinstein’s lawyers have said they also plan to call a woman who was with him the night another accuser Lauren Marie Young alleges Weinstein groped her in a Beverly Hills hotel suite in 2013.

Young told jurors last week that Claudia Salinas, a Mexican model and actress, closed the door behind her and Weinstein as they went into the bathroom and “was standing right there” when Young managed to get out.

Young told the jury she shot Salinas “an evil look, and I left as quick as I could without saying anything.”

Salinas, now 38, has appeared in several films, including in the 2009 Weinstein-produced “Crossing Over” with Harrison Ford.

Weinstein’s lawyers started Monday by calling to the witness stand the longtime manager of an apartment building where actress Annabella Sciorra alleges Weinstein barged through her door, pinned her to a bed and raped her in late 1993 or early 1994.

Nelson Lopez, the manager of the Gramercy Park building for the past 31 years, testified that he remembers Sciorra living there for about a year and that she never complained about anyone being allowed up to her apartment without permission.

Sciorra testified earlier in the trial that Weinstein showed up at her apartment after he gave her a ride home from a dinner with entertainment industry figures. She said they’d already said their goodbyes outside and that she was getting ready for bed when she heard a knock on the door. 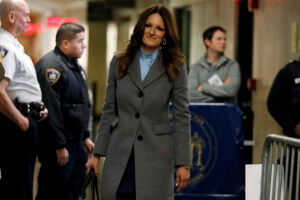 Weinstein lawyer Donna Rotunno questioned Sciorra on cross-examination about why she didn’t speak up when she says he first arrived at her apartment — why she didn’t ask why he was there or if the doorman had let him up.

Rotunno also questioned Sciorra’s behavior after the alleged assault, noting that she never went to the police, a doctor or a hospital and that she never sought out security footage of Weinstein entering the building or got to the bottom of how he got past the doorman.

“At the time, I didn’t understand that that was rape,” Sciorra told the defense lawyer.