KNOX COUNTY, Tenn. — A dinner outing with friends ended in a fiancée’s brutal beating, according to a Knox County prosecutor as she delivered opening statements in the abuse trial of reality TV sensation Geoffrey Paschel.

Assistant District Attorney General Heather Good describes how Kristen Chapman, formally Kristen Wilson, was ambushed by her fiancé when she returned from walking her dog the night of the altercation. The state told 12 jurors and one alternate about how she pretended to be asleep after the attack, waiting for the right moment to flee her home and run to the neighbor’s house to call 911.

The defense had a much different account of what transpired the night of June 9, 2019. Defense attorney Greg Isaacs accused the state of over-exaggerating the victim’s injuries. Paschel told authorities her injuries were self-inflicted and the defense said if Chapman’s account was in fact true, she would have suffered far worse injuries.

The first witness on the stand was the neighbor who called 911 after a “scared” and “severely beaten” Kristen Wilson knocked on her front door in the middle of the night. The witness testified that the two hid in the kitchen, afraid the defendant would show up at her house.

After lunch, the state called their next witness, the victim Kristen Chapman. She relived the entire alleged attack, blow by blow, to the jury. She described the horrifying events she claimed took place, where her fiancé repeatedly bashed her face into the steps and walls. How she screamed for him to stop and tried to get away, but she said he was relentless, dragging her up and down the stairs. 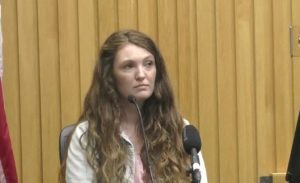 Kristen Wilson (now Kristen Chapman) testifies in the Knox County Courthouse on October 5, 2021, about how her ex-fiancé Geoffrey Pashel “brutally beat” her in 2019. (Court TV)

“When I was screaming, I was trying to get away, but I couldn’t. He was too strong,” Chapman said.

The prosecution introduced photos of Chapman with two black eyes, a bloody lip, a bruised spine, along with multiple pictures of blood stains and splatter.

On cross, the defense questioned Chapman’s timeline from that night, pointing to large chunks of unaccounted time.

He also questioned statements Chapman made about the defendant allegedly deleting content from her phone or as Chapman described, “basically erasing himself” from her cellphone.

The state’s final witness was Knox County Officer Matthew Johnson, whose body cam footage was shown in court. He responded to the scene the night of the incident and testified about the injuries he observed on both the victim and the defendant. It was the first time the court heard about the marks on Paschel’s body after the fight. Paschel, shirtless in the video, says she attacked him and then ran out of their house.