BIG SPRING, Texas (AP) — Authorities have arrested a man in the death of a 13-year-old West Texas girl who was reported missing more than a decade ago, a police spokesman said.

Texas Rangers arrested Shawn Casey Adkins on Monday on a murder charge in the killing of Hailey Dunn, said Sgt. Fred Biddle, a spokesman for the Texas Department of Public Safety. He said Adkins was arrested in the area of Big Spring, a city nearly 300 miles (480 kilometers) west of Dallas. Biddle said he could not immediately provide more details on the case. 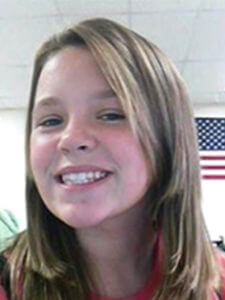 This undated photo provided by the Texas Department of Public Safety shows 13-year-old Hailey Dunn, who was reported missing in December 2010. (Texas Dept. of Public Safety)

Adkins was booked into the Howard County jail and released on a $2 million bond Monday, jail records show. They do not list an attorney for Adkins, and Biddle said he did not know if he has one. Attempts to reach Adkins at phone numbers associated with him in public records were not immediately successful.

Hailey was reported missing in December 2010. She and her mother, Billie Dunn, lived in the small West Texas town of Colorado City at the time and Adkins, who was dating Hailey’s mother, was named as a person of interest.

Hailey’s body was discovered in April 2013 in a remote area near a lake about 30 miles (50 kilometers) northwest of Colorado City. Authorities have not released a cause of death.

Adkins told The Associated Press shortly after Hailey’s disappearance that he was not involved and that he was praying for her safe return.

Authorities have not said what led police to arrest Adkins, and Biddle referred questions to prosecutors in the 32nd Judicial District Attorneys Office.

District Attorney Richard Thompson said in a statement that Adkins’ arrest was the result of a “multi-county and multi-agency effort.” He declined to provide further information, saying the case is still under investigation.

Adkins’ arrest was met with shock by some in Colorado City, a 4,500-resident town just 40 miles (65 kilometers) west of Big Spring where he was taken into custody.

“The shock of him being arrested was my shock too because I wasn’t aware of any of it,” said Police Chief Charles Rice. Rice said that by the time he came to the department the case had been handed off to the Texas Rangers and the FBI.