By ARLEIGH RODGERS and RICK CALLAHAN Associated Press/Report for America

DELPHI, Ind. (AP) — Authorities have arrested a drugstore worker in the unsolved slayings of two teenage girls in the woods near their northern Indiana hometown nearly six years ago, and said Monday it’s concerning that the suspect has been living in their same small community.

Richard Matthew Allen, 50, was arrested Friday on two murder counts in the killings of Liberty German, 14, and Abigail Williams, 13, in a case that has haunted the Indiana city of about 3,000 people.

The investigation is “far from complete,” State Police Superintendent Doug Carter said at a news conference on Monday. He encouraged the community to come forward with more information, and said if any other people “had any involvement in these murders in any way, that person or persons will be held accountable.”

The evidence against Allen, a licensed pharmacy technician who worked at a local CVS store, has been temporarily sealed to jeopardizing the “integrity” of their investigation, authorities said. “While I know you were all expecting final details today concerning this arrest, today is not that day,” Carter said. 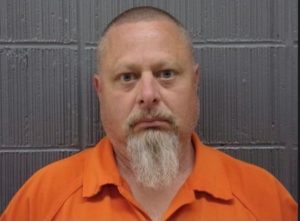 Richard Matthew Allen has been arrested and faces two counts of felony murder in connection with the 2017 killings of Abby Williams and Libby German. (Indiana State Police)

The deaths of Libby and Abby were ruled a double homicide, but police have never disclosed how they died or described what evidence they gathered. Their bodies were found in a rugged, heavily wooded area near a hiking trail on Feb. 14, 2017, one day after they vanished during a day off school.

A relative of one of the teens dropped them off at a hiking trail near the Monon High Bridge just outside their hometown of Delphi, about 60 miles (97 kilometers) northwest of Indianapolis. They were reported missing that evening after failing to appear at the place where they were going to be picked up.

Libby’s grandmother, Becky Patty, told reporters that Allen once processed photos for the family at the CVS store in Delphi where Allen worked. He didn’t charge them for the photos, she added.

The families always knew that the suspect could have been “living right amongst us, hiding in plain sight,” said her grandfather, Mike Patty. “That’s why we never stopped searching anywhere, because we didn’t know where he was.”

Becky and her husband Mike both wore gray shirts that read “Today is the Day…Justice will be served for Abby and Libby,” to Monday’s news conference.

A judge found probable cause to arrest Allen, who entered a not-guilty plea at his initial hearing on Friday, authorities said. “All persons arrested are presumed innocent,” Carter said.

Sheriff Bill Brooks in adjacent White County, where Allen is being held without bond, said Monday he did not know whether Allen has an attorney. No murder case was listed Monday afternoon under his name in Indiana’s online court system.

“We haven’t closed the door on the investigation,” McLeland said when asked if authorities were investigating others. “We’re not presuming anything at this point.”

Within days of the killings, investigators released two grainy photos of a suspect walking on the abandoned railroad bridge the girls had visited, and an audio recording of a man believed to be the suspect saying “down the hill.” 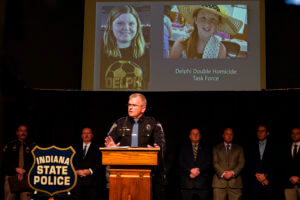 Authorities released an initial sketch of the suspected killer in July 2017, and then another in April 2019 based on video from Libby’s cellphone. Police also released video in April 2019 showing a suspect walking on the abandoned railroad bridge the girls had visited.

The brief video, photos and audio of the suspect came from Libby’s cellphone. Authorities hailed her as a hero for recording potentially crucial evidence before she was killed.

In December 2021, state police announced they were seeking information from people who had contact with someone who used a fictitious online profile to communicate with young girls. State Police said investigators determined the profile “anthony_shots” was used from 2016 to 2017 on Snapchat, Instagram and other social media platforms.

A statement from CVS said the company is “shocked and saddened to learn that one of our store employees was arrested as a suspect in these crimes. We stand ready to cooperate with the police investigation in any way we can.”

“We remain devastated by these murders and our hearts go out to the German and Williams families,” the statement said.

The case has been followed closely over the years by true-crime enthusiasts who have offered plenty of theories, but Carter urged people not to “subjectively interpret” the case while officers continue to gather information. “If you choose to be critical of our silence be critical of me, not the front line,” he said.

Sheryl McCollum, who has appeared on television as a cold case consultant, traveled to the news conference from Atlanta after meeting the Germans at a true-crime convention. She praised the authorities for holding the facts close to their vests. 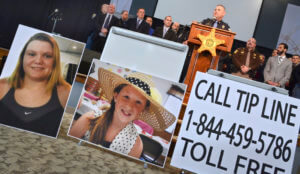 “I think the integrity of this case, and not telling every single thing they know, I think that’s powerful,” Sheryl said. “If you start showing your hand, you know, you can mess things up and you can tell too much … The investigation does not stop at arrest. It really just begins. So now is when they’re really going to go to work.”