WASHINGTON (AP) — Members of the far-right Oath Keepers were ecstatic when then-President Donald Trump invited supporters to a “wild” protest in Washington on Jan. 6, 2021, when Congress would be certifying the results of the 2020 election, according to messages shown Thursday during the seditious conspiracy trial for the militia group’s founder and four associates.

During an FBI agent’s testimony, jurors saw a string of online posts that Oath Keepers members in Florida exchanged after Trump’s tweet on Dec. 19, 2020, about a “big protest” at the upcoming joint session of Congress on Jan. 6. “Be there, will be wild!” Trump said. 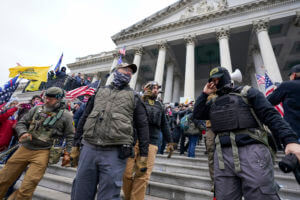 FILE – Members of the Oath Keepers on the East Front of the U.S. Capitol on Jan. 6, 2021, in Washington. A member of the Oath Keepers who traveled to Washington before the Jan. 6 attack at the U.S. Capitol testified during the seditious conspiracy case against Oath Keepers founder Stewart Rhodes and four associates on Wednesday, Oct. 12, 2022, about a massive cache of weapons the far-right extremist group stashed in a Virginia hotel room. (AP Photo/Manuel Balce Ceneta)

Trump’s words appeared to energize Oath Keepers members. They used an encrypted messaging app to discuss their plans to be in the nation’s capital on Jan. 6, when, after a Trump rally near the White House, a mob stormed the Capitol and disrupted Congress from certifying Democrat Joe Biden’s victory over the Republican incumbent.

“These will be flying Jan. 6 in front of the Capitol,” Meggs wrote in a post that included the image of an Oath Keepers flag.

Graydon Young, an Oath Keepers member from Florida who has pleaded guilty to a conspiracy charge, said he was going to Washington even though it “feels like a fool’s errand.” Oath Keepers founder and national leader Stewart Rhodes responded on Dec. 25, 2020, that he disagreed with that assessment.

“Trump needs to know we support him in using the Insurrection Act,” Rhodes wrote. “And he needs to know that if he fails to act, then we will.”

Rhodes added that he believed the Secret Service would be “happy to have us out there” if Trump “calls us up as militia.”

A key argument for Rhodes’ lawyers is that the Oath Keepers founder believed Trump was going to invoke the Insurrection Act, which gives the president broad authority to call up the military and decide what shape that force will take. Trump did float that kind of action at other points in his presidency.

Meggs and Rhodes, who’s from Granbury, Texas, are on trial with Thomas Caldwell of Berryville, Virginia; Kenneth Harrelson of Titusville, Florida; and Jessica Watkins of Woodstock, Ohio.

They are the first Capitol riot defendants to be tried on seditious conspiracy charges for what prosecutors said was a plot to stop the lawful transfer of presidential power. The Civil War-era charge carries a maximum sentence of 20 years in prison.

Defense lawyers have accused prosecutors of cherry-picking messages and have said there is no evidence the Oath Keepers had a plan to attack the Capitol.

The trial started last Monday and is expected to last more than a month.

Trump’s Dec. 19 tweet also was a focus of a July hearing by the House committee investigating the Jan. 6 insurrection.

One committee member, Rep. Stephanie Murphy, D-Fla., said the tweet “served as a call to action and in some cases as a call to arms.” A second, Rep. Jamie Raskin, D-Md., said it “electrified and galvanized” Trump supporters, including the Oath Keepers, the Proud Boys and other far-right extremists.

Several members of the Proud Boys, including former national chairman Henry “Enrique” Tarrio, also are charged with seditious conspiracy for their alleged roles in the Jan. 6 attack and await a trial in December.

Thursday’s testimony for the Oath Keepers trial focused on members of the group’s Florida contingent and their communications in the days leading up to the riot.

In a chat for Oath Keepers members in Florida on the Signal messaging app, Rhodes said they should adopt the QAnon slogan “WWG1WGA,” which stands for “Where we go one, we go all.” QAnon is a conspiracy theory that has centered on the baseless belief that Trump was secretly fighting a cabal of Satan-worshipping “deep state” enemies, Hollywood elites and prominent Democrats.

Three days before the Capitol attack, Meggs sent a message to an associate that said, “1776 we are going to make history.”

“The American revolution,” the agent replied.