WASHINGTON (AP) — A unanimous Supreme Court on Thursday threw out the convictions of two political insiders involved in the “Bridgegate” scandal that ultimately derailed the 2016 president bid of their ally, then-New Jersey Gov. Chris Christie. 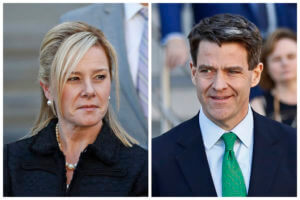 FILE – This combination of March 29, 2017 file photos shows Bridget Kelly, left, and Bill Baroni leaving federal court after sentencing in Newark, N.J. The Supreme Court has thrown out the convictions of the two political insiders involved in New Jersey’s “Bridgegate” scandal. The court says in a unanimous decision that the government had overreached in prosecuting Kelly and Baroni for their roles in a political payback scheme that created a massive traffic jam to punish a New Jersey mayor who refused to endorse the reelection of then-Gov. Chris Christie, a Republican. (AP Photo/Julio Cortez, File)

The justices said there was evidence of deception, corruption, and abuse of power in the political payback saga that involved four days of traffic jams on the world’s busiest motor vehicle bridge, the George Washington Bridge spanning the Hudson River between New York and New Jersey. But “not every corrupt act by state or local officials is a federal crime,” Justice Elena Kagan wrote for the court.

In the end, the justices concluded that the government had overreached in prosecuting Bridget Kelly and Bill Baroni for their roles in the scheme. Kelly was a deputy chief of staff to Christie. Baroni was a top Christie appointee to the Port Authority, the bridge’s operator.

The court’s decision to side with Kelly and Baroni continues a pattern from recent years of restricting the government’s ability to use broad federal laws to prosecute public corruption cases. In 2016, the court overturned the bribery conviction of former Virginia Gov. Bob McDonnell. In 2010, the court sharply curbed prosecutors’ use of an anti-fraud law in the case of ex-Enron CEO Jeffrey Skilling.

Kagan wrote for the court that Kelly and Baroni had acted for “no reason other than political payback.” In devising the traffic jam, they were seeking to punish the Democratic mayor of Fort Lee, New Jersey, Mark Sokolich, after he declined to support the reelection bid of Christie, the GOP governor.

To create chaos, on the traffic-heavy first day of school in 2013, Kelly and Baroni schemed to reduce from three to one the number of dedicated lanes onto the bridge from Fort Lee. They created a traffic study as a cover story for their actions.

Kagan said that Kelly and Baroni ”jeopardized the safety of the town’s residents,” and she repeated some of their gleeful plotting in the decision. At one point, Kelly wrote what Kagan called “an admirably concise e-mail” about the plan. It read: “Time for some traffic problems in Fort Lee.” Later, after the traffic snarls began, Kelly wrote in a text, “Is it wrong that I am smiling?” Kagan noted that they then “merrily kept the lane realignment in place for another three days.”

“But not every corrupt act by state or local officials is a federal crime. Because the scheme here did not aim to obtain money or property, Baroni and Kelly could not have violated the federal-program fraud or wire fraud laws,” wrote Kagan. She grew up in New York City and is one of four justices who grew up in New York or New Jersey.

Christie, in a statement following the high court’s ruling, called the prosecutions of his former allies a “political crusade” against his administration and lashed out at prosecutors and the Justice Department under President Barack Obama, a Democrat.

“As many contended from the beginning, and as the Court confirmed today, no federal crimes were ever committed in this matter by anyone in my Administration. It is good for all involved that today justice has finally been done,” Christie wrote.

Christie denied knowing about the plan for gridlock ahead of time or as it was unfolding, but trial testimony contradicted his account and the scandal helped derail his presidential bid. On Thursday, he wrote that the prosecutions “cost the taxpayers millions in legal fees and changed the course of history.”

President Donald Trump, who emerged from a crowded GOP field in 2016 to become the White House nominee, tweeted his congratulations to Christie after the ruling. The president called the decision a “complete and total exoneration” and said there was “grave misconduct by the Obama Justice Department!” Yet as a candidate, Trump had attacked Christie by saying the governor “totally knew about” the lane closings before they happened. Christie endorsed Trump when he left the race.

Nothing in Kagan’s opinion suggested there was any misconduct by prosecutors.

The U.S. attorney’s office in New Jersey, which prosecuted Kelly and Baroni, said in a statement that the court’s decision “speaks for itself, and we are bound by that decision.”

Former U.S. Attorney Paul J. Fishman, who oversaw the prosecutions, said in a statement he was disappointed with the ruling. Christie “may try to rewrite his legacy —- and he may want to rewrite history — but the fact remains that the ‘deception, corruption, and abuse of power’ was committed … by his team on his watch.”

In a statement, Kelly said the justices’ decision “gave me back my name and began to reverse the six-and-a-half-year nightmare that has become my life.” Kelly did not ultimately serve any prison time but had been weeks from beginning a 13-month sentence when the Supreme Court agreed to hear the case.

Baroni served about three months of an 18-month sentence before he was released after the high court agreed to weigh in.

“I have always said I was an innocent and today, the Supreme Court unanimously agreed,” he wrote in a statement.