BERKELEY SPRINGS, W.Va. — A jury has found Andy J. McCauley, Jr. guilty of all charges in the death of 15-year-old Riley Crossman, including first-degree murder. Prosecutors argued McCauley murdered his girlfriend’s daughter on May 7, 2019. Her body was found nine days later in rural Berkeley County.

Following the verdict, jurors heard brief arguments and testimony in the mercy phase of the trial. They returned with a verdict of no mercy, meaning the recommendation of life in prison without the possibility of parole. A sentencing date of November 4 has been set.

BERKELEY SPRINGS, W.Va. — A West Virginia man is facing life in prison if convicted for the death of his girlfriend’s 15-year-old daughter.

Andy J. McCauley, Jr. is accused of murdering Riley Crossman in May 2019. Division of Natural Resources officers found the teen’s body in rural Berkeley County on May 16.

According to a criminal complaint, Crossman was reported missing on May 8, when she didn’t come home from school.  Two days later, authorities interviewed McCauley about his whereabouts the day Crossman was last seen.

In a series of inconsistencies, McCauley claimed he went to his job as a construction worker and didn’t leave the site all day. He then claimed he left the job site to buy drugs, but changed his statement to say he went home to get drugs for himself and a coworker.

When searching McCauley’s pickup truck, Morgan County Sheriff’s deputies reportedly found drywall mud in the bed. A cadaver dog also “indicated to the positive presence of a deceased person odor,” according to the complaint. Authorities say the drywall mud was consistent with “the location of possible drywall mud on (Crossman’s) body.” Deputies said surveillance video also puts McCauley near where Crossman’s body was found.

McCauley was taken into custody hours after Crossman’s remains were found. He is facing charges of first-degree murder, concealment of a body, and death by child abuse. 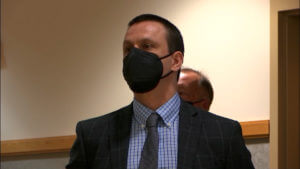 In this still from video, defendant Andy McCauley, Jr. stands as the jury enters on Sept. 27, 2021. McCauley is accused of murdering 15-year-old Riley Crossman in 2019. (Court TV)