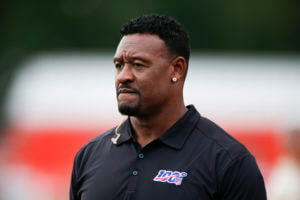 FILE – Former NFL football player Willie McGinest Jr. watches the Cleveland Browns during practice at the team’s training facility July 31, 2019, in Berea, Ohio. Authorities say McGinest was arrested in connection with an assault at a Southern California nightclub. A Los Angeles County Sheriff’s Department statement says the incident occurred Dec. 9, 2022, at a club in West Hollywood and witnesses identified McGinest as one of the people who were involved. (AP Photo/Ron Schwane, File)

The incident occurred Dec. 9 at a West Hollywood club and witnesses identified McGinest as one of the people who were involved, the Los Angeles County Sheriff’s Department said in a statement.

McGinest was arrested for investigation of assault with a deadly weapon after coming to the West Hollywood sheriff’s station to give a statement about the incident.

He posted bond and was released, the sheriff’s statement said. It was not immediately known if he had an attorney to comment on the allegation.

McGinest spent 15 years in the NFL with New England and Cleveland after playing college ball at the University of Southern California.