NEW YORK (AP) — One of Ghislaine Maxwell’s accusers testified Tuesday that she was just 14 years old when the British socialite had her undress, fondled her and told her she had a “great body” that financier Jeffrey Epstein would enjoy.

The woman, who was identified only by her first name, Carolyn, was the third witness to testify at the sex trafficking trial about being sexually abused by Epstein in encounters facilitated by Maxwell, his one-time girlfriend and, later, employee.

Carolyn offered some of the most explicit descriptions so far at the New York trial of Maxwell’s alleged grooming of underage victims, who prosecutors say were lured into “a pyramid scheme of abuse.” 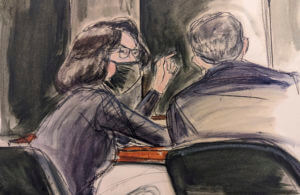 In this sketch, Ghislaine Maxwell, seated left speaks to her defense attorney Christian Everdell prior to the testimony of “Kate,”during the trial of Ghislaine Maxwell, Monday, Dec. 6, 2021, in New York. (Elizabeth Williams via AP)

At times choking up, she testified that she was a heavy drug user and middle school dropout when she was first taken to Epstein’s estate in Palm Beach, Florida, by an older teenage friend, Virginia Roberts, now known as Virginia Giuffre.

They were greeted by Maxwell, who said “You can take her upstairs and show her what to do,” Carolyn testified.

She said Giuffre and Epstein had sex while she watched. She added she was paid $300 in $100 bills at the end of the encounter.

After that, she became a regular at the estate, hired to perform sexualized massages.

Maxwell knew she was only 14 at the time, but that didn’t dissuade her, Carolyn testified.

She told jurors that during one encounter in Epstein’s massage room in the early 2000s, Maxwell “felt my boobs and my hips and my buttocks and she said I had a great body for Mr. Epstein and his friends.”

Maxwell, 59, has denied charges she groomed underage girls for Epstein, who killed himself in jail in 2019. Her lawyers say the government is making her a scapegoat for Epstein’s sex crimes.

Prosecutors say Carolyn was one of several vulnerable teens from troubled backgrounds who were pulled into a scheme where Maxwell and Epstein would encourage girls in low-income parts of Florida to find other young victims to bring to his home, in exchange for a finder’s fee.

Giuffre would later become perhaps the best known of Epstein’s accusers for her allegations that the financier and Maxwell flew her around the world, starting at age 17, to have sex with numerous famous and influential men, including Britain’s Prince Andrew.

All of those men, including Andrew, have denied those allegations and they are not expected to be part of the trial.

A prosecutor asked Carolyn who else saw her “fully naked” at Epstein’s home. She responded it was Maxwell, two of Epstein’s “friends” and two “girls.” She didn’t say whether the friends were men or women and didn’t elaborate on what happened with them.

Giuffre has acknowledged recruiting girls into Epstein’s circle, claiming she was coerced into doing so by Maxwell. The Associated Press does not name victims of sexual abuse unless they decide to tell their stories publicly, as Giuffre has.

Carolyn faced a cross-examination in which a defense lawyer sought to highlight what the defense says were discrepancies between her testimony and a 2008 lawsuit she brought against Epstein in which Maxwell wasn’t mentioned. The lawsuit was settled for $250,000.

“Ms. Maxwell was not a topic of discussion at that time,” she said.

During the cross examination, she repeated her allegation that Maxwell had “fondled” her, adding, “because of that, my heart is broken and so is my soul.”

The testimony came on a day when prosecutors indicating they could finish presenting their case to the jury as soon as Thursday. The defense could then call witnesses. 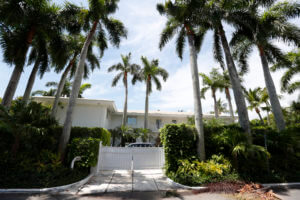 Prosecutors on Tuesday showed the jury more than a dozen photographs of Epstein and Maxwell, including one of the couple swimming together while nude. Defense lawyers had objected to the photo, but prosecutors successfully argued it could be used to back up witness testimony about scenes from Epstein’s Florida home and show that the pair had more than an employee-boss relationship.

She stopped seeing Epstein for a while when she had a baby in 2004, but she tried to go back to doing massages at age 18 because she needed the money, in part to pay for a drug habit. Epstein only wanted her if she had younger friends to bring around.

“That’s when I realized I was too old,” she said.