MEMPHIS, Tenn. (AP) — A Tennessee kindergarten teacher who police said was kidnapped during a pre-dawn run and then killed earlier this month died from a gunshot wound to the head, an autopsy report released Thursday showed.

Eliza Fletcher, 34, had a gunshot wound in the back of the head and also had blunt-force injuries to her right leg and jaw fractures, according to the autopsy completed by the West Tennessee Regional Forensic Center in Memphis. 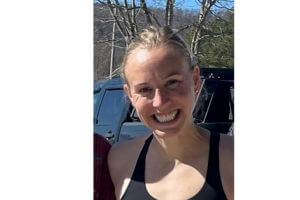 FILE – In this undated photo provided by the Memphis Police Department, 34-year-old Eliza Fletcher, of Memphis, Tenn., is shown. Fletcher, the Tennessee kindergarten teacher who police said was kidnapped during a pre-dawn run and then killed, died from a gunshot wound to the head, an autopsy report released Thursday, Sept. 29, 2022, showed. (Courtesy of Memphis Police Department via AP, File)

“There are two semicircular defects to the skull consistent with a single gunshot to the head with the bullet travelling in a posterior to anterior (back to front) and right to left direction,” the report said.

Fletcher was running on the University of Memphis campus when she was forced into a vehicle after a struggle about 4 a.m. Sept 2. Police said her body was found Sept. 5 behind a vacant home after a massive police search lasting more than three days.

Cleotha Henderson, who also has gone by the name Cleotha Abston, has been charged with first-degree murder and kidnapping in the case. He has not entered a plea, and his lawyer has declined requests for comment.

U.S. Marshals arrested Henderson a day after the abduction after police detected his DNA on a pair of sandals found near where Fletcher was last seen, according to an arrest affidavit.

After her body was found, another police affidavit said officers noticed vehicle tracks next to the duplex’s driveway, and they “smelled an odor of decay.”

Purple running shorts whose appearance was consistent with those Fletcher was wearing were found in a discarded trash bag nearby, the affidavit said.

The autopsy report said a shell casing was recovered from the area where Fletcher was found.

The killing of Fletcher, a mother of two, shocked the Memphis community and has led to a flood of support for her and her family. A church held a vigil to pray for her and her family, and runners in Memphis and several other U.S. cities held an early-morning running event in her honor a week after she was kidnapped.

Henderson also previously kidnapped a prominent Memphis attorney in 2000 when he was 16 years old. He spent 20 years in prison for that crime.