Defense attorneys Robert Sanger, representing Paul Flores, and Harold Mesick, representing Ruben Flores, concluded the presentation of their side of the case. Court was dismissed for the day and is expected to resume Thursday morning after an off-the-record day on Wednesday in which the different parties involved will discuss the next steps in the trial. 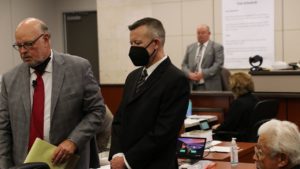 Paul Flores is on trial for the murder of Kristin Smart who was a 19-year-old freshman at Cal Poly when she disappeared from campus in May of 1996. Flores was the last person to be seen with her. His father, Ruben, is charged as an accessory, accused of helping hide Smart’s body.

Earlier Tuesday, the defense called former San Luis Obispo County Sheriff’s detective Henry Stewart to the stand. He testified about working alongside another detective in 1996 on the Kristin Smart case.

Stewart said that in 2001, he and Detective Crawford worked with the FBI to conduct an undercover investigation in an effort to get a confession from Paul Flores.

Paul’s attorney, Robert Sanger, asked Stewart about his interview with Tim Davis in July of 1996 where Stewart testified to hearing Davis mention seeing Kristin laying on the lawn of the house next door during the party at 135 Crandall Way.

During cross-examination by the prosecution, Deputy District Attorney Christopher Peuvrelle asked Stewart about the same interview where Stewart said Davis had told him he had seen Paul talking to Kristin multiple times during the Crandall Way party.

Next on the stand was sheriff’s detective Clint Cole, who was asked by Sanger about when he was officially assigned to the case in 2017.

Cole testified that he inherited several hundred documents in relation to the Kristin Smart case, including files from the Cal Poly Police Department, the San Luis Obispo County Sheriff’s Office and the FBI.

Cole was asked about the “Justice for Kristin Smart” Facebook page. Cole says he follows the page and testified that he was concerned the page could jeopardize the investigation.

Sanger also questioned Cole about Justin Goodwin, asking him if Goodwin had expressed interest in receiving a $75,000 reward for information about the investigation. Cole confirmed that was the case.

Cole told the court that he was aware of a previous search at Paul’s mother’s house on Branch Street in Arroyo Grande where no evidence was collected. Cole also said he could not recall any canine searches at that address.

Sanger also asked Cole about canine searches at Ruben’s home in Arroyo Grande. Cole testified about organizing excavations at the residence due to the alerts the dogs had given during their search but said no human remains were recovered from the excavations. 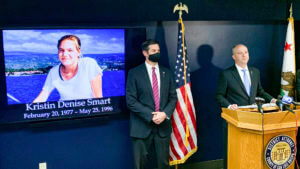 Cole was asked about various wiretaps involving the Flores family. The detective said there was no FBI involvement in this part of the investigation.

He also discussed mentioning to podcaster Chris Lambert that he had trucks in sheriff’s office custody that once belonged to the Flores family. The information was released to the public for the first time through Lambert’s “Your Own Backyard” podcast.

In November of 2019, Goodwin reportedly sent a letter to the Smart family that Cole later received a copy of.

The detective says he also received images of a skate ramp from Goodwin and got Jennifer Hudson’s contact information from him.

Cole says at one point, Hudson was scheduled to come to the sheriff’s office for an interview but she didn’t show up and reportedly told Cole she was sick.

Cole says Hudson was “warned” by Lambert to not tell Cole about some things.

Peuvrelle asked Cole how many trucks the Flores family owned in 1996. Cole said the family owned a white Nissan, a Ford Ranger, Ford Explorer and two vehicles that belonged to Paul’s sister.

Peuvrelle also asked Cole if he remembered Hudson saying Paul told her he had “taken care” of Kristin and admitted to burying her at “my place?” Cole replied, “yes.”

Peuvrelle then asked Cole whether Hudson told him she was worried about coming forward with information because she was worried the Flores family would “hurt her?” Sanger objected, motioning for a new trial.

He said there is no evidence the Flores family tried to intimidate Hudson and says Hudson had no grounds to make that claim. Sanger also says Peuvrelle’s questioning prejudiced the jury.

After Peuvrelle said Sanger has brought forth many frivolous misconduct claims, the judge overruled Sanger’s motion for a new trial, saying questioning from counsel should not be interpreted as evidence while also saying the defense attorney has also gotten away with numerous leading questions.

Questioning of Cole continued. Peuvrelle asked Cole whether a Volkswagen vehicle was attributed to the Flores family in 1996? Cole replied yes. Mesick asked Cole how many total excavations there had been. Cole said about eight, including the excavations done at Ruben’s home.

Mesick asked the detective whether any human remains had been found during any of the excavations. Cole said no but added that animal bones had been recovered during the excavation at Cal Poly.

Sanger asked whether pig bones were found in Huasna. Cole said that some small, inch-long animal bones were found; however, he could not specify the type of animal they came from.

Sanger then asked Cole whether he was aware the press was notified before searches were conducted at the Flores home. 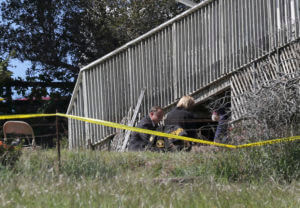 FILE – In this March 16, 2021, file photo, San Luis Obispo Sheriff’s Office personnel dig in an area in the backyard of the home of Ruben Flores, in Arroyo Grande, Calif. Flores is the father of Paul Flores, who remains the prime suspect in the disappearance of Kristin Smart in 1996.  (AP Photo/Daniel Dreifuss, File)

Cole replied by saying his team did not notify press about Paul Flores arrest in San Pedro.

Following that, Peuvrelle questioned Cole about whether human blood was found during an excavation at Ruben’s home. Cole said yes but Sanger quickly objected, which the judge overruled.

At that time, both Sanger and Ruben’s attorney, Harold Mesick, said they rest their cases.

Once those are complete, both sets of juries will begin deliberations.

The prosecution rested its case against Paul and Ruben Flores last week.

If convicted, Ruben Flores faces a maximum sentence of three years behind bars while Paul faces a sentence of 25 years to life.