LONDON (AP) — A 19-year-old British man was convicted Tuesday of murdering two sisters as they celebrated a birthday in a London park, a crime driven by the deluded belief that the killings would help him win a lottery jackpot.

Prosecutors said Hussein, who did not know the victims, had pledged to kill six women every six months in the belief he would win the Mega Millions Super Jackpot lottery. They said the suspect was obsessed with demons and spells, and had signed a pact in his blood with a mythical figure known as King Lucifuge. 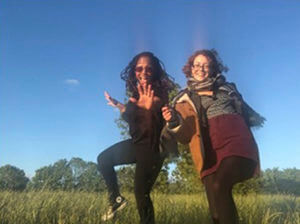 FILE – This is a June 5, 2020 file photo, released by the Metropolitan Police which was shown to the jury at the Old Bailey, timed at 2012, of Bibaa Henry, left and Nicole Smallman taken from Bibaa’s phone in Fryent Country Park, London. A 19-year-old British man has been convicted of murdering two sisters as they celebrated a birthday in a London park last year. Prosecutors say the killer was driven by the deluded belief the slayings would help him win a lottery jackpot. A jury at London’s Central Criminal Court on Tuesday, July 6, 2021 found Danyal Hussein guilty of stabbing 46-year-old Bibaa Henry 27-year-old Nicole Smallman at Fryent Country Park in June 2020. (Metropolitan Police via AP, File)

He was traced through DNA after cutting himself as he attacked the sisters.

The victims’ mother, Mina Smallman, a retired Church of England archdeacon, has criticized the way police responded when her daughters were reported missing on the evening of June 6, 2020. She has said officers showed a lack of urgency after looking at one daughter’s address and seeing her as “a Black woman who lives on a council (public housing) estate.”

The family launched its own search, and the sisters’ bodies were found in bushes by Nicole Smallman’s boyfriend 36 hours after the killings. Family members found the weapon used in the slayings nearby.

Britain’s police watchdog is investigating the way officers handled the missing-persons report. Two police officers have also been charged with misconduct in public office for allegedly sharing pictures of the crime scene on WhatsApp.

Outside court, Mina Smallman said that while she had “made no bones” about her criticism of London’s Metropolitan Police, “today I have to say that I can only commend them.”

“This team moved heaven and earth to ensure we felt that we were being supported. This is the kind of police force that I believe in and we need to work towards so we have justice and families are treated with respect.

“Today, we remember our girls as the wonderful, strong women they were, and we hope that some good will come out of this horrible story,” she said.

Police revealed after Hussein’s conviction that he had been sent to a de-radicalization program at age 15 when his school became concerned he was vulnerable to violent extremism.

“He is where he should be and will be for a very long time.”

Hussein is due to be sentenced on Sept. 22.