Earlier this week, Terry was convicted of killing his girlfriend, elementary school math and science teacher Kay Baker, by nearly decapitating her with a knife. Terry had faced the possibility of a death sentence.

Soon after the verdict, the judge sentenced Terry to life without parole.

In the early morning hours of May 28, a neighbor called police after hearing screams coming from the home that Baker shared with Terry, 47.

When police arrived, they found Baker, 43, dead in the yard with a large stab wound to her neck. A knife had been plunged into her throat. Inside the home, they discovered signs of forced entry to a bedroom, a bathroom door that appeared to be kicked in as well as a trail of blood leading out of the house.

That trail of blood led investigators to a neighbor’s backyard, where they found Terry lying flat on the ground, concealed among a line of trees. He was wearing a tee shirt and underwear that were soaked in blood.

Terry was arrested and charged with first-degree murder.

Friends and loved ones of Baker soon took to social media to lament the unimaginable tragedy of her loss, and to express how much they were going to miss her energy and kindness. 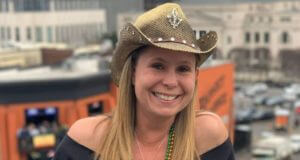 This isn’t Terry’s first stabbing conviction either. He spent three years in a Michigan prison for stabbing his ex-girlfriend, Michelle Rogers. In an interview with WTSP in Tampa Bay, Rogers said that while she was “devastated” about what happened, she wasn’t surprised either.

On the night Baker was killed, witnesses described seeing her with Terry at a local bar. They said Terry was upset because he had reportedly seen Baker dancing with another man.

Initially, the state declined to seek the death penalty. However, when Florida Governor Ron DeSantis had State Attorney Andrew Warren removed from office, he replaced him with Susan Lopez. Lopez is pursuing the death penalty, and Terry’s defense attorney has accused her of “playing politics.”