The March 2015 incident in Australia, where Depp was filming the fifth “Pirates of the Caribbean” movie, is sharply disputed and has been a focal point of the four-week civil trial in Fairfax, Virginia.

The night ended with the tip of Depp’s middle finger cut off, and him writing vulgar messages in blood on the walls of the house. Depp denies assaulting her in any way and says his finger was severed when Heard threw a vodka bottle at him; Heard said she’d taken sleeping pills after she was attacked and was not awake when the finger was severed.

The graphic description of the sexual assault left Heard fighting for her composure as she described it to jurors. She said Depp had been angry as soon as she arrived in Australia, roughly a month after the couple had married in February 2015. 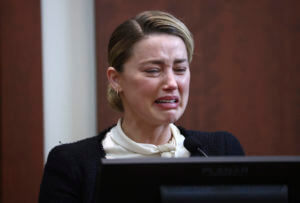 Actor Amber Heard testifies in the courtroom at the Fairfax County Circuit Court in Fairfax, Va., Thursday, May 5, 2022. Actor Johnny Depp sued his ex-wife actor Amber Heard for libel in Fairfax County Circuit Court after she wrote an op-ed piece in The Washington Post in 2018 referring to herself as a “public figure representing domestic abuse.” (Jim Lo Scalzo/Pool Photo via AP)

He was accusing her of sleeping with co-stars in her movies, including Billy Bob Thornton and Eddie Redmayne, with whom she’d just shot the film “The Danish Girl” — accusations she denied.

The fight escalated to the point where he threw her into a ping-pong table, breaking it, Heard testified. He ripped off her nightgown, and Heard said she was naked and exposed as she was assaulted.

“I couldn’t get up. I thought he was punching me,” she said. “I could just feel this pressure on my pubic bone.”

She thought he was assaulting her with her fist, but later figured out that she was being assaulted with a bottle, and realized that there had been numerous bottles broken in the fight.

“I looked around and saw so much broken glass. I just remember thinking, ‘Please God, please don’t be broken,'” she said.

Heard described bizarre details in the aftermath of the attack, including seeing her shredded burgundy nightgown used to wrap a raw steak that had been left out. She said that when Depp’s security team finally arrived to tend to his severed finger, Depp was still trying to leave vulgar messages for her, but was trying to write them by urinating on the wall. 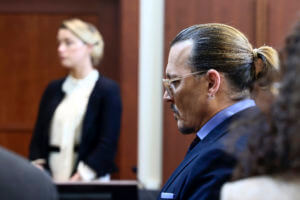 Actor Amber Heard, left, and actor Johnny Depp appear in the courtroom at the Fairfax County Circuit Court in Fairfax, Va., Thursday, May 5, 2022. Depp sued his ex-wife Heard for libel in Fairfax County Circuit Court after she wrote an op-ed piece in The Washington Post in 2018 referring to herself as a “public figure representing domestic abuse.” (Jim Lo Scalzo/Pool Photo via AP)

Much of the trial testimony has been repetitive of a civil suit Depp filed against a British newspaper. A judge there ruled against Depp in 2020, finding that Heard had in fact been assaulted multiple times by Depp. But the sexual assault allegations described by Heard on Thursday were not publicly aired in the U.K trial.

Depp is suing Heard in Virginia for libel over an op-ed she wrote in The Washington Post describing herself as “a public figure representing domestic abuse.” His lawyers say he was defamed by the 2018 article even though it never mentioned his name.

Earlier in her testimony Thursday, Heard testified that Depp surrounded himself with an entourage of enablers to shield him from the consequences of his drug and alcohol use.

She described an incident that has already come up at trial, a May 2014 plane ride from Boston to Los Angeles. According to Heard, Depp was jealous and irate that she was making a movie with actor James Franco that included a kissing scene.

As soon as Depp stepped into the private plane, he began berating her, she said. She got up and walked away, but Depp followed her. At one point, he slapped her, Heard testified. Later, she said, he kicked her, and not one person on board intervened on her behalf.

“I felt this boot in my back,” she said. “I fell to the floor. And no one said anything. No one did anything. You could have heard a pin drop. I just remember feeling so embarrassed.”

Depp, who testified earlier in the trial, described the incident differently. He denied that he’d drank excessively before getting on the plane, and said Heard initiated an argument and pursued him until he felt compelled to hide in a bathroom.

But jurors heard a recording Heard made toward the end of the incident, in which it sounds like Depp is howling and babbling incoherently.

And the jury has seen a text message Depp sent his friend Paul Bettany shortly after the flight, in which he says he’s going to “properly stop the booze thing” because the flight got “ugly.” He also texted Bettany saying, “I’m admittedly too f——- in the head to spray my rage at the one I love for little reason as well.”

Heard has testified that she was physically and sexually assaulted on multiple occasions by Depp, typically when he was drunk or high on drugs. Depp has denied ever hitting her, but Heard’s lawyers have said his denials lack credibility in part because he can’t remember what he’s done when he blacks out.

Depp has said Heard greatly exaggerates his drinking, and that he tolerates his liquor well. Friends, family and employees of Depp have taken the stand and backed up his contention.

But Heard said that’s part of the problem: She said Depp has a team around him that cleans him up when he gets sick, and enables him to go about his business without acknowledging the consequences of his drinking. 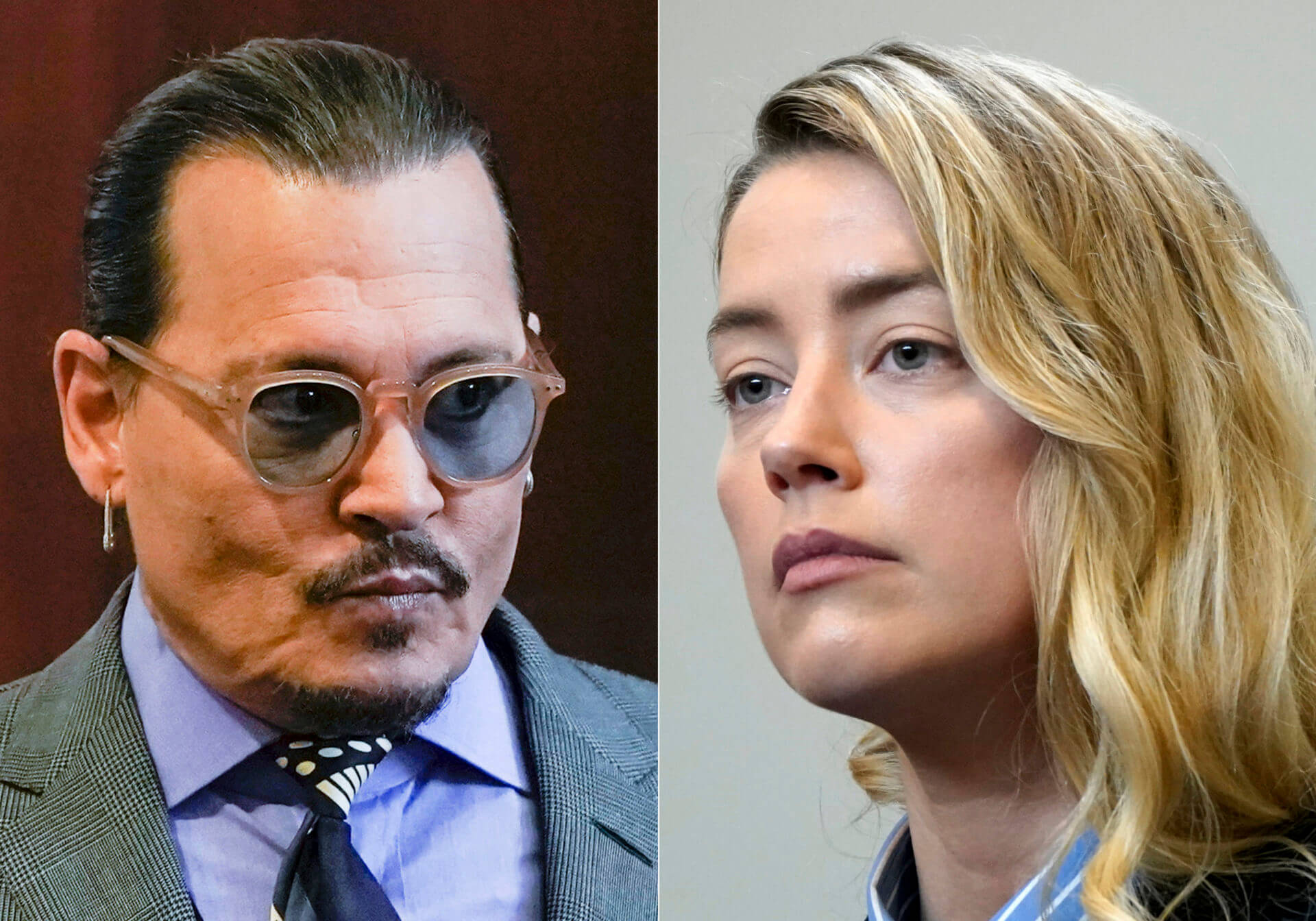 This combination of two separate photos shows actors Johnny Depp, and Amber Heard in the courtroom at the Fairfax County Circuit Court in Fairfax, Va., on May 4, 2022. Depp is suing his ex-wife Heard for libel after she wrote an op-ed piece in The Washington Post in 2018 referring to herself as a "public figure representing domestic abuse." (Elizabeth Frantz/Pool Photos via AP)
MORE NEWS