NASHVILLE, Tenn. (WTVF) — Almost seven years after a man was murdered inside his South Nashville apartment, his killer remains on the run.

“They took a man who was so full of life, and so much fun,” said Glenda Bonds, Patrick Burdine’s mother.

Burdine, 28, moved to Nashville from Jackson to pursue his passion for makeup, dance and performing. He often performed under the stage name Tiffany Brooks. His mom said his last performance was nine days before he was killed.

“By the time the show was over, he had about 60 calls from all over the U.S. wanting him to come and perform in their city,” Bonds said.

Bonds said she was very close with her son, and they talked on the phone almost every day. The last time she spoke with him was the day before he died.

On July 27, 2015, one of Burdine’s neighbors at the Horizon Park Apartments on Packard Drive called police after hearing several gunshots. When officers arrived, they found Burdine unresponsive inside his apartment. They kicked in his door and found Burdine had been shot multiple times, and he died a short time later. He lived alone at the apartment.

“Whatever happened, happened inside the apartment,” said Detective Matthew Filter, with the Metro Nashville Police Department. “The door was locked. The apartment was locked up. We believe he knew who his attacker was.”

Filter said a neighbor also reported seeing a Black man who was about 5 feet, 10 inches tall, running from the building after the shooting. The man wasn’t wearing a shirt and had on white pants.

Several robberies were reported in the area in the months leading up to the shooting, but MNPD never found any links between the crimes. Bonds said Burdine’s apartment was also broken into about three months before his death, but the person responsible was never caught. Burdine also told his mom the day before he was killed that he believed someone was following him. Bonds said she believes someone has information on who killed Burdine, and investigators agree. 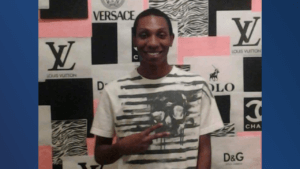 The mother of a Nashville man murdered in 2015 is asking the public to come forward with information to help solve the case. (Glenda Bonds via WTVF)

“I think this case can be solved,” Filter said. “It is just a matter of getting a few people to cooperate with us.”

Bonds said, as she waits for answers, she has relied on the support of family, friends, and her strong faith.

“I have this saying that I’ve told many friends,” Bonds said. “It’s OK to visit those dark places, but you can’t stay there. It’s God that helps me come out of it.”

Even as months have turned into years, Bonds said she believes justice is still possible.

“It would mean a lot to me on this earth before I leave here, to know those guys are behind bars,” she said.

If you have any information on Burdine’s murder, please call the Metro Police Cold Case Unit at 615-862-7329, or Nashville Crime Stoppers at 615-74-CRIME.

This story was originally published March 21 by WTVF in Nashville, an E.W. Scripps Company.