UVALDE, Texas (AP) — When the shooting began at Robb Elementary School in Uvalde, Mario Jimenez’s son was in the classroom next door. The 10-year-old saw his teacher and a friend hit by bullets that passed through the wall. Now, Jimenez worries the boy will never again feel secure in a classroom.

“I don’t think these kids are going to feel safe going back to school no matter what they do. They’re supposedly protected by the system, and they know the system failed them,” he said. 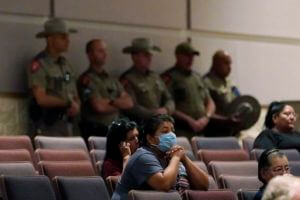 In this July 18, 2022, file photo, Parents, family members and Texas State Troopers attend a special meeting of the Board of Trustees of Uvalde Consolidated Independent School District where parents addressed the shooting at Robb Elementary School in Uvalde, Texas. Parents in Uvalde, Texas, are livid about the security lapses that contributed to the school shooting this spring. They’re terrified to send their kids back to school. Yet further securing schools — such as through additional lockdown drills — is controversial. (AP Photo/Eric Gay)

In the aftermath of the May shooting that killed 19 children and two teachers, poor decisions by law enforcement have attracted widespread criticism, but the Uvalde school system is also taking its share of the blame for basic failures — unlocked doors, a spotty alert system and lax enforcement of rules. Now, incensed parents and politicians want concrete safety solutions as the attack becomes part of a larger conversation about how to prepare students for emergencies without potentially inflicting an emotional toll with active-shooter drills.

An investigative report released Sunday by the Texas Legislature found the district did not treat maintenance issues like broken doors and locks with urgency. For instance, the lock on the door to one of the classrooms where the shooting occurred was known to be faulty, and the House committee concluded the shooter likely entered the room through that unlocked door.

The House committee found “a regrettable culture of noncompliance by school personnel who frequently propped doors open and deliberately circumvented locks” at Robb Elementary. The report said school administrators and district police tacitly condoned the behavior, noting that the school suggested the practice “for the convenience of substitute teachers and others who lacked their own keys.”

At an Uvalde school board meeting this week, parents and families were outraged at the oversights. Jazmin Cazares, whose younger sister Jacklyn was killed, asked what the school district would do to make students feel safe returning. 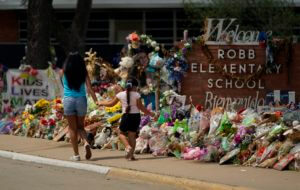 n this July 12, 2022, photo, Visitors walk past a makeshift memorial honoring those killed at Robb Elementary School, in Uvalde, Texas. Parents in Uvalde, Texas, are livid about the security lapses that contributed to the school shooting this spring. They’re terrified to send their kids back to school. Yet further securing schools — such as through additional lockdown drills — is controversial. (AP Photo/Eric Gay, FILE)

At the same meeting, Rachel Martinez declared herself unwilling to send her daughter, Layla, back to school after the armed intruder snuffed out 21 lives — and any confidence she had that Layla would be safe.

“This failure falls on all of you,” Martinez told the board at the three-hour meeting. “When you go home and lock your doors tonight, remember: That shouldn’t be a luxury.”

The vast majority of U.S. school systems conduct lockdowns and active-shooter drills that, in some cases, include simulated gunfire and blood as children crouch quietly out of sight. But the drills are only one part of the equation, according to experts.

Amy Klingman, founder of the Educator’s School Safety Network, said the impulse to double-down on simulations or buy the latest gadgets is understandable, but those responses can be part of larger plans that include enforcing the basics, like locking doors and training staff. Drills can emphasize securing a classroom or quickly evacuating children in a variety of scenarios, such as a parent without legal custody attempting to take a child.

“Why does history keep repeating itself? Because we keep doing the same thing,” Klingman said. “We keep emphasizing only active-shooter response, and we don’t make daily operational safety a part of what we do.”

The Uvalde report exposed another potential flaw: Sounding the alarm too regularly can diminish vigilance and lull schools into a false sense of security.

The school’s proximity to the border with Mexico meant frequent lockdowns whenever Border Patrol agents or state police troopers were in the area attempting to apprehend migrants. Between February and May, the school experienced nearly 50 lockdowns or security alerts.

“After a period of time, you would have that diminished expectation of vigilance … ‘Oh, here’s another. We’re doing it again,’” said Mo Canady, executive director of the National Association of School Resource Officers. Schools with that many alerts might consider a tiered system that distinguishes between threat levels, he said.

But not all employees even received alerts because of poor Wi-Fi or phones that were turned off or in a drawer. Some employees would have had to log in to a computer to get the message, the report found. Others didn’t understand how to use the system, said Ben Adams, a Uvalde coach.

“It was introduced to us in a short, 10-minute presentation before school started,” Adams said at the meeting.

Elizabeth Ruiz, the mother of three children in the Uvalde schools, said the students at Robb Elementary did “so many, so, so many” lockdowns this year but believes improving the physical safety of the building — having a single point of entry and requiring scannable identification — would do more than potentially frightening drills.

“Yes, the kids needs to have the drills, but it needs to be more than, ‘Go under a table,’” Ruiz said.

For years, some parents and teachers have warned that the drills are traumatic for students, whose mental health has become even more of a concern on the rebound from COVID-19 disruptions.

“It’s not about trying to scare people straight,” Klingman said. “It’s about doing the right things that make a difference.”

Jimenez worries that continuing to practice active-shooter drills will further traumatize his son and other children who lived through the shooting, “because in their minds they’re probably already thinking, ‘This isn’t going to protect me.’”

Jimenez isn’t impressed by the school district’s plans to fix locks and install cameras. He’d like to see the buildings change to key-card access and for the schools to “hire actual security — people who will do their job.”

He hopes teachers and administrators at schools across the country see what happened in Uvalde and improve security before tragedy strikes again.

“None of the parents here want to send their kids to school,” Jimenez said.