NEW YORK (AP) — Prince Andrew’s lawyers asked a U.S. court again Wednesday to throw out a lawsuit accusing him of sexual abuse, citing multiple legal defenses.
Among them: The lawyers said that if any sexual activity did occur between the prince and Virginia Giuffre, it was consensual.

The court filing made clear that Andrew wasn’t admitting sexual contact with Giuffre. But it said if the case wasn’t dismissed, the defense wants a trial in which it would argue that her abuse claims “are barred by the doctrine of consent.” 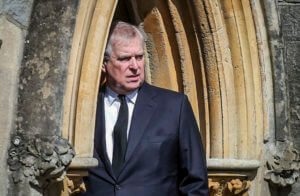 FILE – Britain’s Prince Andrew appears at the Royal Chapel at Windsor, following the death announcement of his father Prince Philip, April 11, 2021, in England. Prince Andrew wants a jury to decide a lawsuit against him by his sexual assault accuser Virginia Giuffre, if he can’t get the case dismissed altogether. The request from his lawyers Wednesday, Jan. 26, 2022, was inside a formal response to the lawsuit Giuffre filed against him in August in Manhattan. (Steve Parsons/Pool Photo via AP, File)

Attorney David Boies, representing Giuffre, responded in a statement asserting Andrew “continues his approach of denying any knowledge or information concerning the claims against him, and purporting to blame the victim of the abuse for somehow bringing it on herself.”

The defense request was filed in federal court in Manhattan, where Giuffre sued Andrew in August. The American accused the British royal of sexually abusing her when she was 17 while she traveled with financier Jeffrey Epstein.

Andrew has strenuously denied Giuffre’s allegations and attempted to get the lawsuit tossed. Earlier this month, Judge Lewis A. Kaplan rejected his attempt to win an early dismissal, allowing depositions and other evidence gathering by both parties to move forward. 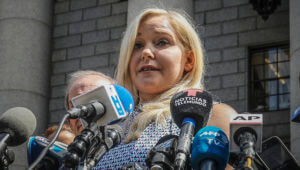 FILE – Virginia Roberts Giuffre holds a news conference outside a Manhattan court following jailhouse death of Jeffrey Epstein, Aug. 27, 2019, in New York. Britain’s Prince Andrew wants a jury to decide a lawsuit against him by Giuffre—who is accusing him of sexual assault, if he can’t get the case dismissed altogether. The request from his lawyers Wednesday, Jan. 26, 2022, was inside a formal response to the lawsuit Giuffre filed against him in August in Manhattan. (AP Photo/Bebeto Matthews, File)

Wednesday’s response was filed by Los Angeles attorneys Andrew Brettler and Melissa Lerner. They say the suit should also be dismissed on several other grounds, arguing the civil litigation against the prince should be barred because Giuffre is a permanent resident of Australia and bound by a settlement between Epstein and Giuffre.

Giuffre asserted that she met Andrew while she traveled frequently with Epstein between 2000 and 2002, when her lawyers maintain she was “on call for Epstein for sexual purposes” and was “lent out to other powerful men,” including Andrew. Her lawsuit said she still suffers significant emotional and psychological distress and harm.

In the wake of the judge’s decision earlier in January, Prince Andrew — who had already stepped back from royal duties — was stripped of his honorary military titles.