UVALDE, Texas (AP) — A police commander at the scene of the Uvalde massacre was informed that children were alive in a classroom with the gunman more than 30 minutes before officers breached the room and ended one of the deadliest school shootings in U.S. history. 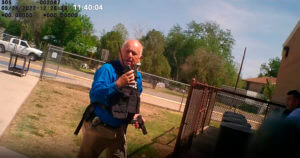 This image from video released by the City of Uvalde, Texas shows city police Lt. Mariano Pargas responding to a shooting at Robb Elementary School, on May 24, 2022 in Uvalde, Texas. Pargas was the acting chief for the city on the day of the shooting and was placed on administrative leave in July. (City of Uvalde via AP)

A dispatcher can be heard on audio recordings obtained by CNN telling the acting city police chief that “eight to nine” kids were alive and in need of help in the classroom. The call came as hundreds of officers gathered in and arou09nd Robb Elementary School, where 19 students and two teachers were killed.

The dispatcher spoke with Lt. Mariano Pargas minutes after a 10-year-old girl dialed 911 from inside the adjoining rooms where the gunman had holed up. The call underscores that members of law enforcement were aware there were children in danger even as they waited more than 70 minutes to confront the gunman. It highlights the actions of another police commander in the hesitant and haphazard response that prompted the firing of schools police Chief Pete Arredondo.

The City of Uvalde placed Pargas on administrative leave in July following a damning report from lawmakers on the response to the shooting. He told CNN that his lawyer instructed him not to speak publicly but, “there’s a lot of stuff that I can explain, that I would love to defend myself.”

On the recorded call, Pargas asks how many children are alive and the dispatcher responds, “eight to nine are still alive.” He responds, “OK, OK thanks” and ends the call.

Authorities have said the gunman did most of his shooting within minutes of entering the classroom at 11:33 a.m., but it’s unclear whether there’s an official tally of how many children in the room were not killed. Corina Camacho, whose son was shot and was one of the survivors, told The Associated Press that 11 children survived and their families try to stay in touch. Children have publicly recounted playing dead to avoid being noticed by the gunman.

Body camera footage previously released by the city shows that at 12:11 p.m. officers massed in a hallway outside the classroom were informed that a Border Patrol tactical team was 30 minutes away. A dispatcher can be heard saying there is a child on the line from the classroom talking of a “room full of victims.” That is relayed to Pargas, who makes no audible comment on the footage.

According to CNN, Pargas spoke with a dispatcher at 12:16 p.m. It was not until 12:50 p.m. that officers entered the room and killed the gunman.