The Uvalde, Texas, gunman gave off so many warning signs that he was obsessed with violence and notoriety in the months leading up to the attack that teens who knew him began calling him “school shooter.”

He was once bullied as a fourth-grader in one of the same classrooms where he killed 19 children and two teachers. And in the planning for the May 24 massacre, he collected articles about the Buffalo, New York, supermarket shooting and played video games with a young student while quizzing him about the school schedule. 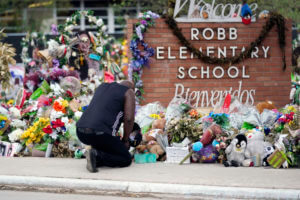 FILE – Reggie Daniels pays his respects a memorial at Robb Elementary School on June 9, 2022, in Uvalde, Texas. Nearly 400 law enforcement officials rushed to the mass shooting that left 21 people dead at the elementary school but “systemic failures” created a chaotic scene that lasted more than an hour before the gunman was finally confronted and killed, according to a report from investigators released Sunday, July 17, 2022. (AP Photo/Eric Gay, File)

A state investigative report that highlighted law enforcement’s bungled response to the mass shooting at Robb Elementary School has also provided the most in-depth account to date about missed red flags and possible motivations surrounding 18-year-old Salvador Ramos. Despite many warning signs, he still managed to legally amass more than $5,000 in guns, ammunition and gear in the weeks leading up to the killings.

Just days before the attack, Ramos spoke out on social media of his plans to do something that would “put him all over the news.” He wrote of a desire to kill himself, shared online videos of beheadings and violent sex, and sent footage of himself driving around with “someone he met on the internet” holding a plastic bag containing a dead cat and pointing BB guns at people out the window.

“The attacker became focused on achieving notoriety,” according the interim report released Sunday by an investigative panel of the Texas House of Representatives. “He believed his TikTok and YouTube channels would be successful. The small number of views he received led him to tell those with whom he interacted that he was ‘famous,’ that they were mere ‘randoms’ by comparison.”

The 77-page report — based on interviews with family members, testimony and data from Ramos’ phone — lays out a long trail of missed signals prior to the massacre but notes these clues were known only to “private individuals” and not reported to authorities. It also found Ramos had no known ideological or political views that would have made his rantings more widely known. 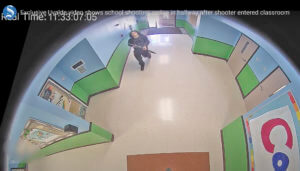 FILE – In this image from surveillance video provided by the Uvalde Consolidated Independent School District via the Austin American-Statesman, a gunman carrying an AR-15 style rifle enters and walks down a hallway at Robb Elementary School in Uvalde, Texas, Tuesday, May 24, 2022. The Uvalde school shooter gave so many signals that he was violent and unstable that he was nicknamed “school shooter” by teenagers who knew him, according to a Texas lawmakers’ report released Sunday, July 17, 2022. (Uvalde Consolidated Independent School District/Austin American-Statesman via AP, File)

The report traces the descent of a shy, quiet boy once thought by a teacher as a “wonderful student” with a “positive attitude” into a mass murderer who gave plenty of signs online and to family members that he was prone to violence as he amassed an arsenal of rifles, body armor and ammunition.

A former girlfriend told the FBI that she believed Ramos had been sexually assaulted by one of his mother’s boyfriends at an early age, the report said, but when Ramos told his mother at the time, she didn’t believe him.

Without assigning a specific motive, the report noted that Ramos talked about painful fourth-grade memories to an acquaintance weeks before the shooting.

Family members told investigators how Ramos had been bullied as a fourth-grader in one of the same linked classrooms where he carried out the attack. They said he faced ridicule over his stutter, short hair and for wearing the same clothing nearly every day.

At one point, the report said, a fellow student tied his shoelaces together and Ramos fell on his face, injuring himself. The report noted that Ramos was flagged by school officials as “at risk,” but never received any special education services.

Failing grades soon were accompanied by frequent absences — more than 100 a year beginning in 2018. The report noted it was unclear if a school resource officer ever visited Ramos’ home. Uvalde High School officials involuntarily withdrew him last fall, when he had only completed the ninth grade. That was about the same time he moved out of his mother’s house and began living with his grandmother, just blocks from the elementary school.

Months before the shooting, Ramos began contacting acquaintances with “vague but ominous messages” about doing something soon.

In March 2022, two months before the shooting, a student on Instagram told him that “people at school talk (expletive) about you and call you school shooter.”

The next month Ramos asked in a direct message on Instagram, “Are you still gonna remember me in 50 something days?” After the answer — “probably not” — Ramos replied, “Hmm alright we’ll see in may.“

Crystal Foutz, who attended school with Ramos, told The Associated Press he was frequently angry and gave off “vibes” like he could shoot up the place, though it was taken more as joke than serious.

“You heard people joke and say, ‘He looks like a school shooter,’” said Foutz, though she quickly added, “I’ve heard it said about other people.”

Ramos took jobs at two fast-food restaurants to save money for what he told acquaintances was “something big,” which family members assumed was his own apartment or car. Instead it was guns and bullets, which he tried to get two people to buy for him while he was 17 and unable to obtain legally.

But on May 16, the gunman turned 18, and began purchasing firearms and ammunition, persuading an uncle to drive him to a gun store. He eventually spent more than $5,000 on two AR-style rifles, ammunition and other gear. And with no criminal history or even arrest, Ramos passed all background checks.

He had earlier written online “10 more days,” eliciting speculation from readers that he was planning to “shoot up a school or something” or commit “mass murder.” A friend told him that an acquaintance was “telling everyone u shooting up the school.”

He also spent time playing the children’s videogame Roblox with his cousin’s son, a student at the Robb Elementary, and “elicited from him details about his schedule and how lunch periods worked at the school.”

“I got a lil secret,” Ramos wrote on Snapchat to a German teenager he had befriended days before the May 24 shooting, adding that first he was waiting for something “being delivered” on Monday. His order of 1,740 hollow-point bullets that expand in bodies upon impact, more easily killing, arrived later that day.

“None of his online behavior was ever reported to law enforcement,” the report said, “and if it was reported by other users to any social media platform, it does not appear that actions were taken to restrict his access or to report him to authorities as a threat.”

Shortly before entering Robb Elementary, the gunman reached out to the German teenager he had befriended earlier, posting a message that he had just shot his grandmother in the face and was about to “shoot up” an elementary school.

Not sure he was serious, the German teenager replied: “Cool.” 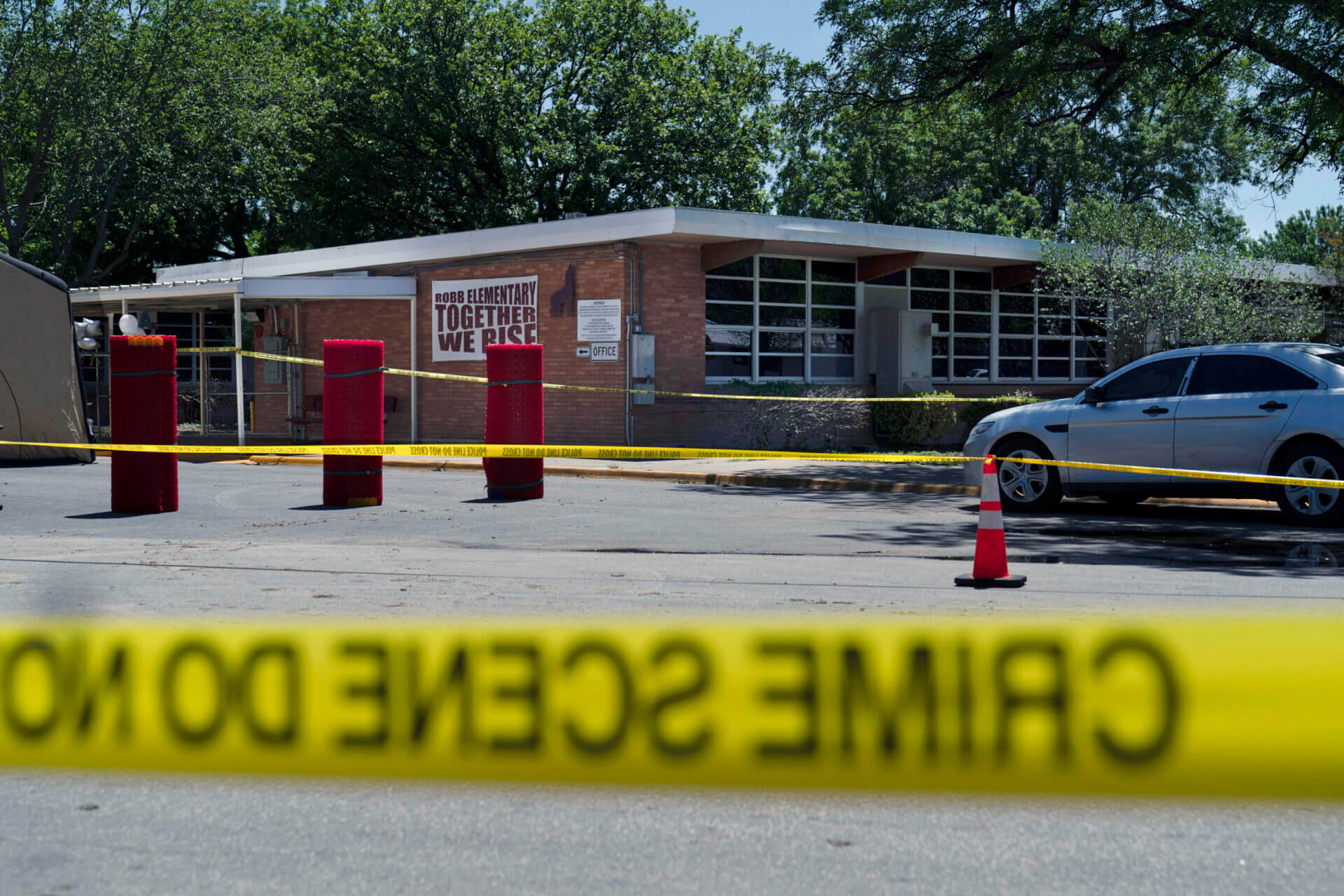 FILE - Crime scene tape surrounds Robb Elementary School after a mass shooting in Uvalde, Texas, May 25, 2022. The Uvalde school shooter gave so many signals that he was violent and unstable that he was nicknamed “school shooter” by teenagers who knew him, according to a Texas lawmakers’ report released Sunday, July 17, 2022. (AP Photo/Jae C. Hong, File)
MORE NEWS