EDINBURG, Texas (AP) — A Texas high school football player who ran onto the field and blindsided a referee who had ejected him from a game was charged with assault Friday and his team has been taken out of the playoffs.

Senior defensive lineman Emmanuel Duron of Edinburg High School appeared in municipal court after being charged with class A assault, a misdemeanor, according to court administrator Maribel Velasquez.

A judge set a $10,000 bond for the 18-year-old Duron, who remained jailed Friday afternoon. Jail records did not list an attorney for Duron.

Duron came running from the sideline area after the referee had announced the ejection, slamming into the official during the first half of the zone play-in game Thursday night against Pharr-San Juan-Alamo in Edinburg, which is located more than 200 miles south of San Antonio.

Duron was escorted from the stadium by police officers. The Monitor of McAllen reported the referee, who the newspaper identified as Fred Gracia, was evaluated for a concussion and a shoulder injury by medical personnel at the stadium. 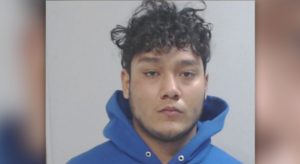 The Edinburg Police Department via CNN

The game resumed after a delay, with Edinburg winning 35-21 to advance. However, the Edinburg Consolidated Independent School District said Friday it had decided to remove the team from the playoffs after the attack.

“We extend a sincere apology to the referee and his family. On behalf of the Edinburg CISD Board of Trustees and administration, we apologize to the athletes, staff, and our school community,” the district said.

The Texas Association of Sports Officials said in a statement it is also investigating the incident.

“Unfortunately, this type of blind‑sided assault on an official while working on the field is not new to Texas Football,” the association said.

Duron, who was the District 31-6A Defensive Player of the Year last season, is also the Bobcats’ kicker and punter and a star wrestler.