The incident was described by police as a “mental health crisis,” and no charges were brought against either of them.

According to the police report, the incident was reported August 12 at 4:30 p.m. near a convenience store at 39 East 100 North in Moab in which “the male and female had engaged in some sort of altercation.” Police investigated the incident as disorderly conduct.

A witness reported to police “seeing a male, later identified as Brian Laundrie, and a female, later identified as Gabrielle Petito, arguing over a phone.” The witness also said, “when Brian got into the van, he saw what appeared to him as Gabrielle hitting Brian in the arm and then climbing through the driver’s window as if Brian had locked her out and she was trying to find a way in.”

Officer Daniel Robbins wrote in the report, “Gabrielle, who was in the passenger seat, was crying uncontrollably.” Robbins said Petito told him she had been having arguments with Brian that day and was “struggling with her mental health.”

Laundrie told the officer that the pair had been arguing “more than usual,” and their relationship had been strained recently after “traveling together for the last 4 or 5 months.” Laundrie also told police both of them struggled with an unspecified medical or emotional condition.

“While arguing near Main Street, he had attempted to separate from her in so they could both calm their emotions,” Officer Robbins wrote in the police report. “He got into their van and Gabrielle had gone into a manic state. Brian said Gabrielle, thinking he was going to leave her in Moab without a ride, went to slap him. As Gabrielle started to swing, Brian pushed her away to avoid the slap.”

“After evaluating the totality of the circumstances,” Officer Robbins wrote, “I do not believe the situation escalated to the level of a domestic assault as much as that of a mental health crisis. I then determined the most appropriate course of action would be to help separate the parties for the night so they could reset their mental states without interference from one another.”

Another officer, Eric Pratt, wrote that the couple “reported they are in love and engaged to be married and desperately didn’t wish to see anyone charged with a crime.” 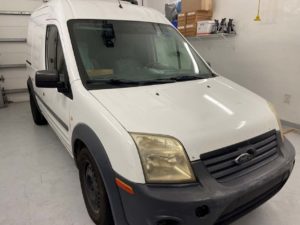 Officer Robbins said Petito took the van while Laundrie got a hotel room for the night.

“I instructed both Brian and Gabrielle to take advantage of this time apart to relax their emotions and regain control of their anxiety,” Officer Robbins wrote.

According to the report obtained by FOX 13 News, officers instructed Gabby Petito and Brian Laundrie to separate for the night “and regain control of their anxiety.”

Petito was reported missing on September 11 by her mother when Gabby failed to check in for several days. The couple from Florida were on a road trip in a converted van touring National Parks.

Gabby’s Instagram posts show the couple were in Utah for several weeks. The last physical sighting of Gabby was at a Salt Lake City hotel and her latest Instagram post was taken in Ogden, Utah on August 25. The pair then allegedly went to Grand Teton National Park in Wyoming, which is the last place Gabby’s mom said he heard from from her daughter.

Brian Laundrie, her boyfriend, returned to their home in North Port Florida on September 1, alone, with the van the couple had been traveling in.

Police have not accused Laundrie of any crimes but have named him as a “person of interest” because he has not been cooperative with investigators.

Gabby’s family has reportedly organized a search party in Wyoming.

This story was originally published September 15, 2021, by KSTU in Salt Lake City, an E.W. Scripps Company.