CINCINNATI (SCRIPPS) – In March 1985, Linda Lee Couch was sentenced to life in prison for the murder of her husband, Walter Douglas Couch. On March 30, 2021, she once again has the opportunity to prove to the Ohio Parole Board that she should be released.

Investigators said Linda fatally shot Walter in the back of the head, rolled his body in a rug and kept him in the basement of their Price Hill home. Days later, she buried him and the rug in a backyard grave that her three children, father-in-law and a neighbor unknowingly helped dig.

Her oldest daughter, Roxanne Wagner, doesn’t believe her 67-year-old mother has changed at all. 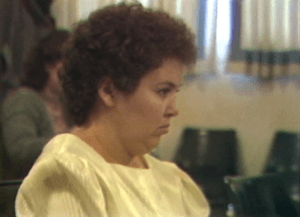 Linda Lee Couch sits in a Hamilton County courtroom on the first day of her trial, Jan. 7, 1985. (WCPO)

“Did she feel trapped? Yes, she did, and she was looking for an escape route,” Wagner told WCPO. “And unfortunately, her escape route or her plan — she didn’t think of the consequences of what it would do to her. But what would it do for the three young children, to his family, even to her own family?”

‘It’s just in your mind forever’

During her trial, Couch’s defense argued that Walter had abused Linda for years and that he struck her before he was shot. In court, sometimes seen clutching a rosary, Linda said she hid Walter’s body because she feared no one would believe the shooting was an accident.

Wagner remembers her mother made sure the kids stayed with their grandparents that weekend. She also knew her mother purchased a gun in the days leading up to the murder, which Linda said in court she had purchased with her husband. Prosecutors said Linda had also replaced Walter’s name on the deed to the family house.

Her father “was no saint,” Wagner said, detailing a childhood marred by “daily beatings” from her father, shouting, arguing and watching her mother be physically abused. But she didn’t believe her mother shot him in the back of the head during a fight, and neither did a Hamilton County jury.

“She had other options” besides murder, Wagner said. “People might not agree with me, and that’s their opinion. And even though this was in the 1980s — I understand that — but she still had options.”

Linda wrapped her husband’s body in a rug and found help to dig a ditch in the family yard. She told her children, father-in-law and a neighbor that she wanted to dig a drainage ditch and plant grass seed near a shed, according to prosecutors. Couch has long denied asking her children to help dig. 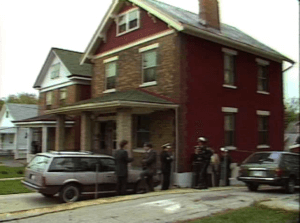 Walter Couch’s body was discovered buried in the yard of his Price Hill home in October 1984. (WCPO)

After Walter was buried, prosecutors said Linda continued living her life “in a normal fashion.” In a release advocating against her parole, current Hamilton County Prosecutor Joe Deters said she repeatedly lied to Walter’s close family about his whereabouts and told the children their father had abandoned them. She also went on a “spending spree” and purchased new furniture in the days after the murder, took the children on vacation and tried to get loans, Deters said in the release.

Linda’s in-laws eventually went to the Price Hill home and confronted her about Walter’s disappearance.

Former Cincinnati Police Chief Tom Streicher, who was a patrolman in 1984, described the “bizarre scene” he found when he was called to the home on West Eighth Street.

“We thought it was a big family fight because there were people running around, except people were running around hollering and screaming,” he told WCPO. “They had shovels and rakes and picks, and I thought, ‘This is kind of crazy. What is going on here?’”

He met Linda Couch that night, who he described as “almost hysterical,” shaking and crying and “looking around or staring at the ground.”

“I was there in the department for 40 years and saw some other things that were fairly similarly bizarre, if that’s the right term to use, but that was really one of those deals where it’s just in your mind forever,” Streicher said.

Ultimately, Couch was convicted of aggravated murder and sentenced to life in prison. She has spent 37 years in the Ohio Reformatory for Women in Marysville, Ohio.

‘I hope they deny her’

The murder and Couch’s trial were chronicled in an episode of the Netflix true crime docuseries “I Am A Killer,” which debuted in January 2020. Both Linda Couch and Wagner spoke to Netflix about the murder for the episode, titled “Trapped.”

“People hear her version or they see clips of her in the courtroom, but they don’t see the aftereffects that it has on everybody else,” Wagner said.

Speaking to the documentary crew, Wagner felt relieved to have a chance to tell her side.

“It’s not something that I normally talk about, but over the last few years I just learned, y’know. It happened, it’s part of who I am — good and bad — so what happens in your past stays with you no matter how hard you try to forget it or push it away, push it to the side.”

Dr. Stuart Bassman, a Cincinnati psychologist, told WCPO the murder likely had a scarring effect on the community around it.

“There is a sense that we all want to believe we’re safe, but to the very extent when a crime like this occurs in our hometown, in our community, it’s a wake up call,” he said.

As for whether prisoners like Couch can re-enter society, Bassman said redemption lies in her hands.

Wagner said she spent a lot of time learning to “forgive” herself for her unwitting part in hiding her father’s body.

“Even though I didn’t do anything wrong, I felt like I had to just tell myself that this wasn’t my doing,” she said.

Wagner now lives in West Africa, thousands of miles and an ocean away from her mother. Even though she feels safe where she is in Ghana, she still looks over her shoulder.

“If the parole board is watching or something, I hope they hear this,” Wagner said. “And I hope they deny her.”

This story was originally published on March 29, 2021, by Kristen Swilley, Sam Rosenstiel of WCPO in Cincinatti.