COLERAIN TOWNSHIP, Ohio (WCPO) — An Indiana woman charged with kidnapping and child endangering after she allegedly abandoned her son on a dark road could face up to 11 years in prison.

Adkins is accused of abandoning her 5-year-old, non-verbal son on a dark road in the rain. The boy was found by passing driver Ron Reese, who stopped to help.

“He seemed cold, he seemed lost, he seemed disheveled, but once he (saw) that there was somebody there, some people there to help him, he began to relax a little bit,” Reese said.

Adkins drove from the family’s home in Shelbyville, Ind. to Tennessee where she dropped off two of her children, according to a press release from Deters. She then turned back around, heading toward Indiana. At some point, she pulled off the highway and abandoned her son on Copper Creek Road.

“She said she had got in a fight with Kevin, which is the kids’ dad, and that he had pretty much kept (the boy) from her,” Davis said. “She said, ‘I’m going back up there to get him, and then I’ll come back and get the two boys.’”

According to Deters, there was another adult in the vehicle with Adkins when she abandoned her son, but that person has not been identified, nor have officials announced any charges against them. 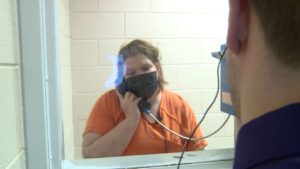 Heather Adkins, charged with kidnapping and child endangering after she abandoned her son on a dark road in Colerain Township, could face up to 11 years in prison. The 32-year-old mother was indicted on Friday, Hamilton County Prosecutor Joe Deters said. Adkins is accused of abandoning her 5-year-old, non-verbal son on a dark road in the rain. The boy was found by passing driver Ron Reese, who stopped to help. (WCPO)

From jail, Adkins told reporters she left the child to save him from herself.

Later, she said she had to leave him in her car that broke down while she went to a gas station.

“(Thomas) waited in the car,” Adkins said. “I had him wait in the car because I ran out of gas, and I had to go forward to get help. But, it was in the middle of the night, and I didn’t have a phone or anything to call for help,” said Adkins.

Adkins was arrested at a gas station in Georgetown, Kentucky on Feb. 18 on an outstanding warrant for an unpaid ticket after police were called for an unwanted person at the store. The Georgetown Police Department said they initially weren’t aware that Colerain police filed a warrant for Adkins on child endangerment.

She was extradited back to Hamilton County, where she is currently jailed under a $105,000 bond.

This story was originally published March 11 by WCPO in Cincinnati, an E.W. Scripps Company.