BOISE, Idaho (AP) — Investigators have yet to name a suspect in the stabbing deaths of four University of Idaho students who were found dead in a home near campus last month. But would-be armchair detectives and internet sleuths have come up with several of their own, the conclusions often based on conjecture and rumor.

Online forums with thousands of members are full of people speculating about possible motives, doxxing the victims’ friends and acquaintances and even outright labeling some people as murderers.

“People are going down these rabbit holes, and they’re hyperfocusing on one individual and attacking that individual,” said Tauna Davis, an Idaho State Police trooper who is helping the Moscow Police Department handle the influx of media interview requests. “You’re attacking, most likely, an innocent person.” 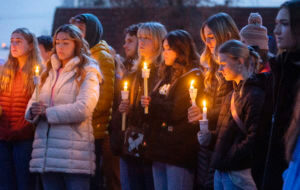 FILE – Boise State University students, along with people who knew the four University of Idaho students who were found killed in Moscow, Idaho, days earlier, pay their respects at a vigil held in front of a statue on the Boise State campus, Thursday, Nov. 17, 2022, in Boise, Idaho. Investigators have yet to name a suspect in the stabbing deaths of four University of Idaho students who were found dead in a home near campus last month. But would-be armchair detectives and internet sleuths have come up with several of their own, the conclusions often based on conjecture and rumor. (Sarah A. Miller/Idaho Statesman via AP, File)

Relatively few details have been released about the homicides, which have left the small college town shaken and grieving for Madison Mogen, Kaylee Goncalves, Xana Kernodle and Ethan Chapin. The four were friends and all members of the university’s Greek system.

The killings have drawn worldwide attention, especially among true crime aficionados. That’s likely because so few facts are known about the case, said Julie Wiest, a sociology professor at West Chester University of Pennsylvania and an expert on extreme violence in media.

“Usually by now, there’s more facts that have been released by law enforcement, so I could see that ramping up the sort of digging and almost grasping at straws by people,” Wiest said. “It’s not that typical, except in high-profile cold cases, where you might see people digging in that way.”

Many of the online sleuths are likely well-intended, she said — perhaps driven by a desire to avoid similar crimes, hoping to bring justice or just seeking a little fame within the true crime fandom.

But they may not realize the harm wild speculation can cause, and today’s theories will likely still exist online years from now, forever linking innocent people to a brutal crime.

“People should maybe think about knowing what they post is in writing forever, and maybe also remembering that there are real people here. The families of the victims should also be considered,” Wiest said. “You can speculate while talking with your friends in your living room, but once you put it on the internet — even if it’s just a one-off thought that popped into your head — it’s there now and it’s not going away.”

The victims and their friends are young enough that much of their lives has been documented online, providing a wealth of material for web sleuths to mine. Photos and rumors once shared with a small circle are now being widely disseminated, exposing the subjects to harassment.

Some sleuths suggested one person’s photo of a successful hunting trip was evidence of nefarious leanings. They may have been unaware that hunting is a common pastime for many Idaho families and that fixed-blade knives are a basic tool for anyone who field-dresses wild game.

Others chased rumors posted to a wholly anonymous online message forum best known as a source of hoaxes, scandals and misinformation. Those rumors criticized and published personal information about various people in the Moscow area, suggesting they should be suspects.

Some even examined obituaries of other University of Idaho students who have died in the past few years in an attempt to tie them to the homicide victims, though none of the other deaths were the result of foul play. At least one grieving family member went online to ask people to stop trying to link his child’s death to the case and to respect the family’s privacy.

All the rumor and wild conjecture aside, there can be some benefit to crowdsourced investigation.

“More heads are better than one, and it’s possible that people on the internet know something that police don’t,” said Christopher Slobogin, a law professor at Vanderbilt University.

Police are welcoming tips but urging people to stay focused on the information released by the police department, not guesses and rumors. Last week they asked the public for help tracking down a white sedan that was seen in the area around the time of the killings.

The internet forums and community members went to work, and Moscow police announced Thursday that investigators were now sorting through 22,000 registered 2011-2013 Hyundai Elantras that matched their search criteria. The department thanked tipsters for their help providing additional information about the vehicle. 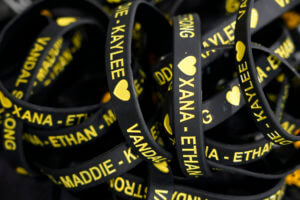 FILE – Bracelets with the names of the four University of Idaho students who were killed on Nov. 13, 2022, are displayed on a table at a vigil for the victims, Wednesday, Nov. 30, 2022, in Moscow, Idaho. Investigators have yet to name a suspect in the stabbing deaths of four University of Idaho students who were found dead in a home near campus last month. But would-be armchair detectives and internet sleuths have come up with several of their own, the conclusions often based on conjecture and rumor. (AP Photo/Ted S. Warren, File)

It’s law enforcement’s job to follow up on those leads, Slobogin noted.

“We don’t want vigilantes out there trying to take the law into their own hands,” he said.

Robbie Johnson, a spokeswoman for the Moscow Police Department, said the attention and speculation has been “awful” for the people at the center of it.

“None of these people did anything wrong. Nothing,” she said. “We all have our LinkedIns, or Facebook pages, and this could really happen to anyone associated with some sort of crime. I have a lot of sympathy for them.”

Johnson declined to talk about the nature of the harassment for fear of fanning the flames.

“The speculations, the rumors, the accusations — anything you put on that fire will just make it burn hotter, so I don’t want to add any more to that,” she said.

The police department announced earlier this month that it would bring charges against harassers if necessary.

In a video statement, Capt. Roger Lanier said some people in the community have received death threats and the effect is a revictimization of people who have suffered “terrible trauma.”

He added that the rumors and harassment can be disheartening, but investigators are driven to solve the case.

“We make progress every day, every hour,” Johnson said, “and that is what keeps you feeling confident and going — knowing that the investigation is going somewhere.”