BOISE, Idaho (AP) — In a normal year, University of Idaho students would be bustling between classes and the library, readying for the pre-finals cramming period known as “dead week.”

On Wednesday, however, a little under half the students appeared to be gone, choosing to stay home and take classes online rather than return to the town where the killings of four classmates remain unsolved, said Blaine Eckles, the university’s dean of students. Some students who were in attendance were relying on university-hired security staffers to drive them to class because they didn’t want to walk across campus alone.

The Moscow Police Department has yet to name a person of interest in the stabbing deaths of Madison Mogen, 21, of Coeur d’Alene, Idaho; Xana Kernodle, 20, of Post Falls, Idaho; Kaylee Goncalves, 21, of Rathdrum, Idaho; and Kernodle’s boyfriend, Ethan Chapin, 20, of Mount Vernon, Washington. The three women lived together in a rental home across the street from campus, and Chapin was there staying that night.

A county coroner said they were likely asleep when they were attacked. Two weeks later investigators have yet to find a weapon used in the killings — believed to be a military-style knife — or elaborate on why they think the killings were “targeted.”

The killings have left the university and the small farming community that contains it shell-shocked. 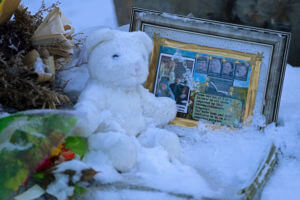 Flowers, a stuffed animal, and a framed image featuring the photos of the four people found dead at a house on Nov. 13, 2022 in Moscow, Idaho, rest in the snow in front of the house on Tuesday, Nov. 29, 2022. The university will be holding a system-wide vigil, Wednesday evening, Nov. 30, 2022 in memory of the students, as investigators continue to look for a suspect and motive in the killings. (AP Photo/Ted S. Warren)

“When we lose any students, especially under these circumstances, my heart is absolutely broken,” Eckles said. “It shakes you to your core a little bit, knowing that in this community, which is incredibly safe in general, can have something this horrific happen.”

Now, as students and faculty members try to navigate a quagmire of grief and fear, government agencies and community members are searching for answers and trying to help lessen the damage.

Gov. Brad Little announced last week that he was directing up to $1 million in state emergency funds for the investigation. The FBI has assigned 44 people to the case — half of them stationed in Moscow — and the Idaho State Police has 15 troopers helping with community patrols and another 20 investigators working the case.

Some community members started online fundraising campaigns to support family members and friends of the slain students. A university alum began raising money to equip women on campus with handheld personal safety alarms. By last week, Kerry Uhlorn had brought in more than $18,000, ordered more than 700 of the alarms and had plans to buy 900 more, Boise television station KTVB reported.

Thousands of people were expected to join the university community in mourning Wednesday evening, with several simultaneous candlelight vigils scheduled across the state. The school districts in Boise and Meridian announced plans to light up their athletic fields at the same time in solidarity. 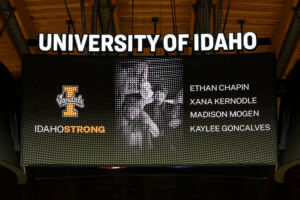 FILE – A photo and the names of four University of Idaho students who were killed over the weekend at a residence near campus are displayed during a moment of silence, Nov. 16, 2022, before an NCAA college basketball game in Moscow, Idaho. The Moscow Police Department has yet to name a person of interest in the stabbing deaths of the students . (AP Photo/Ted S. Warren, File)

Still, the question for faculty members and students remains: How do they focus on learning with four friends gone and a killer on the loose? Staffers are talking directly to students about how to handle the challenge, Eckles said.

“It’s the elephant in the room, right? It’s hard to do that,” Eckles said. “Our faculty are also really understanding that it’s going to be a hard time for students to kind of focus and concentrate at this time. So they’re being very patient and leading with a lot of grace. And quite frankly, I think our students are doing that with our employees as well.”

“We understand there is a sense of fear in our community,” the Moscow Police Department wrote on Nov. 27. Since the killings, the number of people requesting welfare checks, in which an officer is sent to check on a person’s wellbeing, has doubled.

The university has also seen an increase in people calling its “Vandal Care” phone line to report that they were struggling or worried someone else was struggling with an issue, Eckles said.

“While I personally am very confident that the police will resolve (the deaths), until that happens, no one is resting easy,” he said. “There’s someone out there that took the lives of four of our Vandals, and we don’t know who they are. We don’t know where they are.”

Eckes added he hopes the vigils will offer some temporary comfort, but the community will not “ultimately be able to heal until someone is brought to justice for this crime.”

Some of the victims’ family members were expected to attend the vigils. 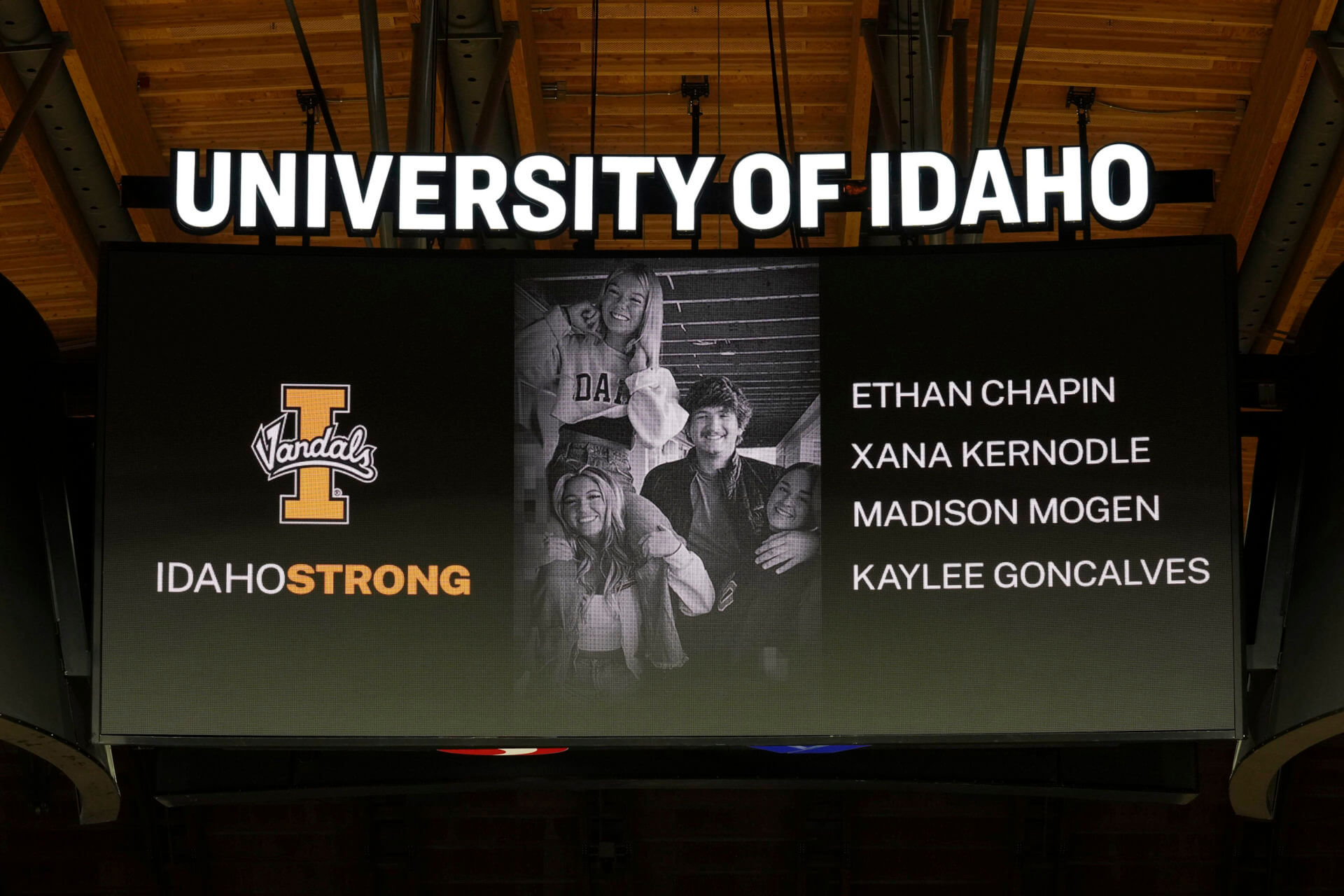 FILE - A photo and the names of four University of Idaho students who were killed over the weekend at a residence near campus are displayed during a moment of silence, Nov. 16, 2022, before an NCAA college basketball game in Moscow, Idaho. The Moscow Police Department has yet to name a person of interest in the stabbing deaths of the students . (AP Photo/Ted S. Warren, File)
MORE NEWS